So here we are almost two years after I went on to review every single film John Wayne appeared in from 1939 to 1976 before taking on all of the Westerns JW made in his wilderness years between 1930 to 1939.

The following reviews are for the last two low-budget Three Mesquiteers productions for Republic Studios in which Duke played Stony Brooke, his role handed back to actor Robert Livingstone from whom Wayne inherited the part the year before.

After winning plaudits as the Ringo Kid in “Stagecoach”, released the same year as “Wyoming Cowboy and “New Frontier”, it was fame and stardom for JW all the way from then on.

Good new, pardners. Someone at Republic saw the light and dropped Lullaby Joslin, the weird one with the wooden dummy, and replaced him with Raymond Hatton as Rusty Joslin. 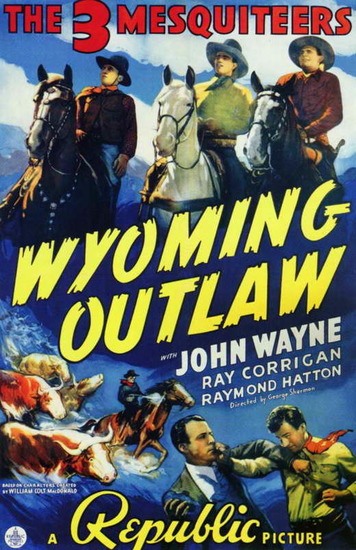 Not only that but “Wyoming Outlaw” is a far cry from the previous Mesquiteer vehicles I’ve seen so far.

You get the usual punch ups, misguided intentions and hammy acting as before, but this time around the violence is real and people don’t get to dodge the bullets as before.

It’s as though someone with a sense of reality and social commitment has been let loose on the script and the end result is an entertainingly adult B-Western with not one wooden dummy in sight.

The bad news is that the timeline between each film is still a bit skewed. This time we’re in 1918 – apparently the Mesquiteers and their fellow cowherders were not aware America had entered the First World War.

Hiding from a huge dust storm, Stoney finds a conveniently placed newspaper that provides a little bit of social history for the audience as regards the reason for the storm.

It seems it’s the result of the land being farmed specifically to provide wheat during the conflict in Europe. Once the war ended the price of wheat fell and most of the farmers were bankrupted, a situation not even the Mesquiteers could sort out.

Chancing upon the daughter of a dirt poor farming family, the Mesquiteers try and help as best they can but her brother, Ray Parker, ends up in trouble with the law when he insists on hunting protected game to feed his family.

Parker, played very convincingly by Don ‘Red’ Barry, points out that ‘the right to eat should come before the right of game to live’. ‘Sounds like pretty good sense’, agrees Stoney. Not a film for animal rights campaigners then.

Once the story starts rolling then the Mesquiteers don’t really feature that much.

They’re depicted more as bystanders in a situation that this time is taken out of their hands as Ray Parker crosses the line into lawlessness and becomes an outlaw on the run.

One aspect of a harder storyline than normal is that people actually start getting killed, something not depicted in the previous episodes.

The climax involves Ray sacrificing his own life by taking a corrupt businessman hostage and forcing the law to shoot both of them.

This is quite a good entry in the series, with co-stars such as Elmo Lincoln, the first Tarzan, and Charles Middleton, of Ming the Merciless fame, along for the ride.

Don Barry packs a real punch as the doomed Ray Parker and apart from the tacked on happy ending I’d thoroughly recommend this to anyone who professes a liking for all things Wayne.

“New Frontier (aka “Frontier Horizon”), released August 1939, should not be confused with the earlier 1935 JW / Republic vehicle “The New Frontier”. 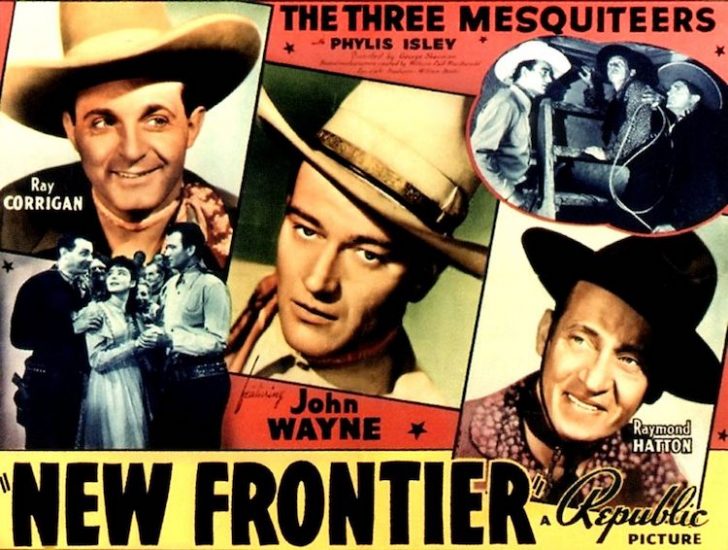 I still find the hermetically sealed world of these Mesquiteer films difficult to get to grips with but when this kind of wild entertainment is on offer, who can resist?

When the valley of New Hope is threatened by the construction of a new dam which will turn the land into a reservoir, the townsfolk decide to fight back.

The constructor tasked with building the dam threatens those who oppose it, only to be told by Duke to ‘take it easy. You don’t know the kind of people you’re dealin’ with, mister’.

The leader of the town declares that ‘None of them high-priced lawyers are gonna’ take our homes away from us’ and proves to be as good as his word, rallying the other inhabitants to take on the thugs who try to violently push the project through.

Ok. So far so good, but just when I’m thinking this is the story of the little guy – or ‘mule-headed hicks’ as they’re referred to – facing off against the tyranny of so-called progress, that old devil called corruption rears its ugly head once more.

The suits fool the townsfolk with a phony land deal by promising to build a pipeline that will irrigate their new town if they give up their rights to New Hope.

The climax takes part on what looks to me very much like a working dam.

I’m assuming it was actually a real one as I just can’t see Republic paying for the construction of a new dam purely for a Western B-movie that runs for less than an hour.

I kept thinking that I vaguely recognised the actress playing the granddaughter of the town patriarch. 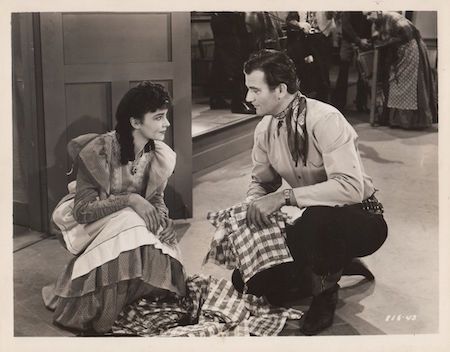 Upon further investigation, it turned out to be Jennifer Jones, famous for her portrayal in 1946 of Pearl Chavez, the dusky maiden in “Duel in the Sun” – or “Lust in the Dust” as it was famously dubbed by critics at the time.

Believe it or not, Wayne was actually approached to play the lead in this film opposite Hedy Lamarr who was originally cast as Pearl but it was not to be.

I’d like to be able to say that John Wayne’s performances in these Mesquiteer films reflect someone on the cusp of stardom, but to be honest his part could have been played by anyone.

The fact is it was, the role of Stoney Brooke also played by Robert Livingstone and Tom Tyler, among others.

If you watch the opening credits of the Wayne Mesquiteer films you can see Duke grinning into the camera but the shot runs just a bit too long for comfort.

I swear I detect a moment when Wayne’s fixed grin starts to falter as if he’s thinking ‘for God’s sake get me out of this series before I shoot somebody for real.

I wanna do something like “Stagecoach” again’. Don’t worry, Duke. It all turns out fine in the end.

This is my final review for all of the Westerns that John Wayne appeared in but not the end of the JWs filmography. There are still quite a few non-Western JW movies to check out so watch this space.