Andrew McLaglen – Thoughts on The Quiet Man And A Lot More

I first met Andrew McLaglen in the early summer of 1998. A producer friend of mine, Gareth Owen, who is still based at Pinewood, suggested we send Andrew a copy of my script for a film called Connemara Days, which is based around the making of The Quiet Man. 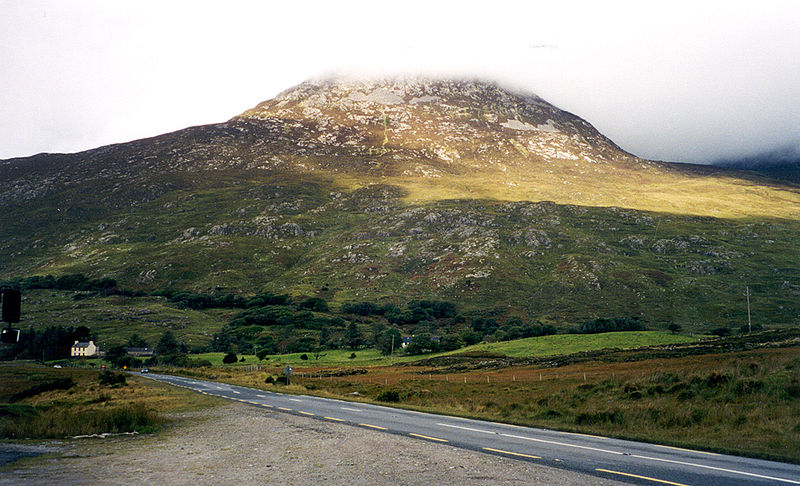 It turned out that he was a big tennis fan and would come over every year to watch the pre-Wimbledon matches at the Queens Club, of which he was a member, then stay for the Wimbledon fortnight.

Andrew had worked as an unaccredited assistant director to John Ford on the The Quiet Man back in 1951, reporting to Republic Studios head Herbert Yates at the time. The idea was for him to take a look at the script and give his verdict on whether it was any good, as well as making any suggestions regarding the storyline as he was obviously there and witnessed the filming himself.

I was invited up to Pinewood to meet Andrew for lunch. As I walked into the restaurant I could hear his booming voice from the other end of the room, and he sounded just like John Wayne.

We had lunch and talked about things in general, mainly to do with how much he liked tennis and England in particular. He was a little unsteady on his feet, having just had an operation on his leg so that he could still play tennis himself. After a few more pleasantries and a very nice lunch we retired to Gareth’s office to hear what Andrew had to say about my script.

I was expecting a certain amount of negativity because he was obviously a seasoned director and knew more about the making of The Quiet Man than I did but I didn’t expect him to tear to into me in such as way that I actually regretted showing him the script in the first place. With his directing hat on he told me there were holes in the plot, characters that were not very well developed and in so many words told me I had to go back to square one.

I don’t know to this day if he was under the impression we were actually asking him to direct it but if that were the case he was obviously not prepared to come out of retirement – his last film had been Eye of the Widow back in 1991 – in order to direct my flawed script.

Things were a bit muted for a while before Andrew said he had to get back to the Queens club to meet his wife. Seeing as he was still unsteady on his feet I offered to give him a lift back into London. I can’t say we exactly bonded on the journey but as long as the subject of my script didn’t come up again we seemed to get along just fine.

During the course of driving into London I asked him where he was born. It was a bit of a surprise when he told me Wandsworth Common. I’d always assumed that his father, Victor, was irish but it turns out he was of Scottish ancestry and himself born in Tunbridge Wells in Kent.

He said how proud he was of his son, Josh, who had worked as the first assistant director to James Cameron on Titanic, which had been released the year before and had by that time taken over a billion dollars at the box-office. I mentioned I was going on a family holiday to America later that year, and had arranged to stay at Gouldings Lodge in Monument Valley.

I’d seen a documentary not long before in which the actor Harry Carey Junior pointed out some of the locations John Ford had used for The Searchers. Andrew told me that Harry, or Dobe as he was known to most people, was a good friend of his and he offered to give me Dobe’s phone number in Durango. I also asked him if he could recommend the best tequila to buy while I was in the States.

He told me that he and Duke used to drink a brand called Patron. I asked him if it was any good, to which he replied, ‘it did the job’. We said our goodbyes and then, as far as I was concerned, that was it, thinking our paths would never cross again.

About a week or so later I caught one of Andrew’s films on television, Shenandoah, which he’d made with James Stewart back in 1965. 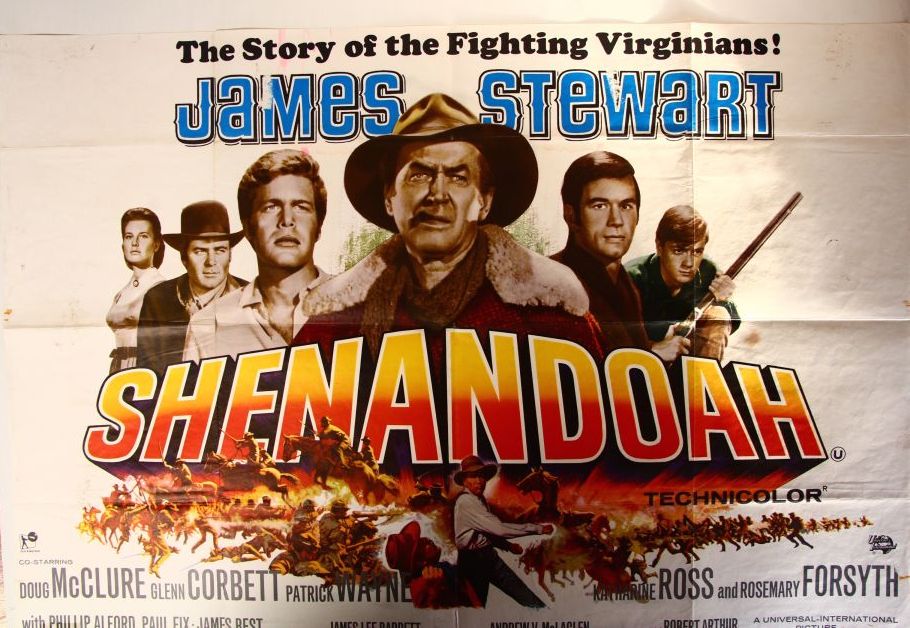 The film writer Edward Buscombe had written a few years before that Andrew McLaglen is ‘sometimes considered an heir to the Western tradition of John Ford’ so, bearing that in mind, I watched Shenandoah a bit more closely this time.

There are certainly what I would call ‘Fordian’ moments in the film, especially the scene in which James Stewart talks to his deceased wife at her graveside and to me I’d say this is one of his better films. I caught up with Gareth not long afterwards and we both seemed to have the same idea at the same time.

Here was a major Hollywood director who came over to England every year to watch the tennis and who knew John Ford personally through the films his father Victor McLaglen had made with Ford, had worked with John Wayne five times and also made films with other famous actors such as Stewart, Robert Mitchum, Kirk Douglas, Charlton Heston, Richard Burton, Roger Moore and so on.

Seeing as Andrew paid his own way to get over here from the States we both thought it might be a good idea to contact the BFI and ask if they were interested in getting Andrew to be the guest of honour for one night at the National Film Theatre to discuss his work and answer questions from the audience. Andrew was obviously up for it so Gareth and I set about making our proposal to the BFI.

To cut a long story short a date was set for the following year for Andrew to be hosted at the NFT. Considering how our conversation had gone regarding my script I have to say I was both surprised and considerably flattered when Andrew emailed to ask me which if his films did I think they should show the night of his appearance at the NFT.

I immediately suggested Shenandoah and, if he didn’t agree, with that choice, maybe Chisum which I think is the best of the films he made with John Wayne. I think I must have rung him to discuss this in more detail once he was back in the States because I remember his wife, Sheila, picking up the phone and telling me he was ‘down on the set’. I wasn’t sure what she was referring to but I found out later that some scenes for a movie called Practical Magic, starring Sandra Bullock and Nicole Kidman, had been filmed at his house, with his son Josh serving as assistant director.

As it turned out he eventually went with Fool’s Parade, which he directed in 1971, starring James Stewart in what was to be the actor’s last credit as a leading man – over here in the UK it was released under the title Dynamite Man from Glory Jail.

The evening at the NFT was completely sold out, most of the audience comprising some of his friends from America who lived near him in a place called Friday Harbor on San Juan Island, just off the coast of Seattle. The rest of the audience comprised members of the cast and crews he had worked with in the UK on films such as The Wild Geese – which I think was his biggest box-office success – The Sea Wolves and North Sea Hijack. I think some of the questions were planted – one of his friends asked him what kind of direction did he have to give Clint Eastwood when he worked with him on several episodes of Rawhide to which Andrew replied ‘I told him to speak up’.

It also came out that, seeing as Andrew stood at a height of 2 metres, he would stand on someone’s feet when he wanted to get their attention. I think it was during the main part of the interview that he was asked by the interviewer, whose name escapes me at the moment, what he thought about other directors who had worked in the Western genre.

He was of course fulsome in his praise for Ford but I’m not sure he was inclined towards Sam Peckinpah. Andrew told the audience of the time he went down to Durango to film Chisum. Apparently Peckinpah was already down there, and had been for a while, working on Pat Garrett and and Bily the Kid. By the time Chisum had wrapped Peckinpah was still there.

After the Q&A we met up afterwards for a few drinks and he thanked Gareth and me for helping to arrange the evening, which he deemed a great success. Either that evening or sometime afterwards when we met up for the last time as his guest at the Queens Club, Andrew told me a bit more about his involvement on The Quiet Man.He had been sent on ahead by Republic to go over to Ireland and arrange the accommodation for cast and crew in and around the village of Cong in County Mayo, where Ford intended to shoot exterior locations for the film.

He told me that when Ford finally arrived he wasn’t happy with the accommodation arrangements Andrew had made for the main cast at Ashford Castle, which is situated just outside the village, so he had to start from scratch and reassign everyone their rooms to suit the director. He also mentioned a near-fatal accident in which a makeup caravan hooked up to the vehicle in front rolled over at high speed and took both the car in front and the caravan itself down into a ditch. Luckily no one was seriously injured.

At 2 metres Andrew was slightly taller than John Wayne, and he told me the actor used to joke that he was the only one who could see Wayne was going bald. By sheer coincidence I had bought a photo of both him and Wayne standing together on the set of The Quiet Man from the shop in Cong that had doubled as the exterior for Pat Cohan’s Bar in the film. 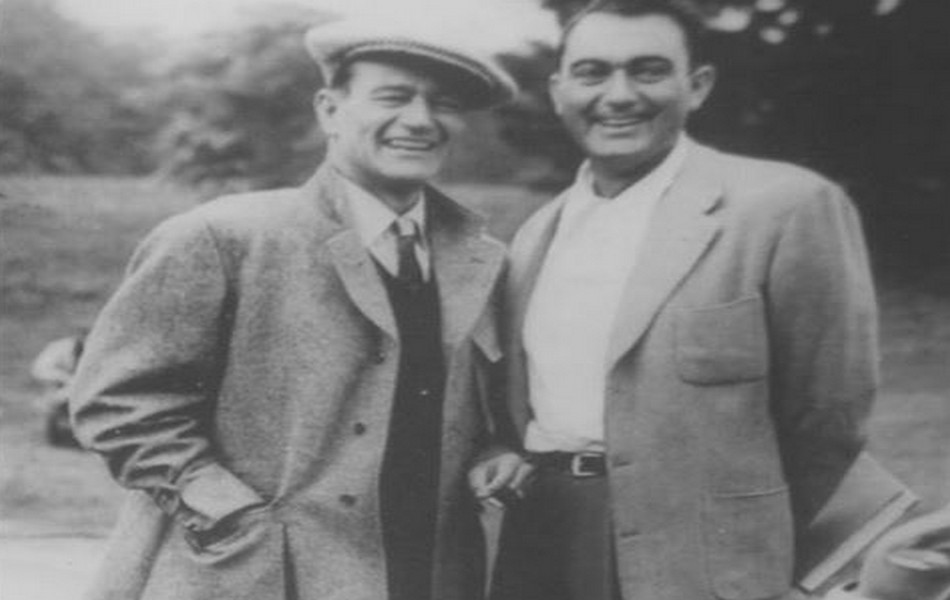 At some point I must have given Andrew a copy of the novelisation of Connemara Days, which I had self-published in Ireland a year or so before, because he has signed the photograph with the message ‘Thank you for your kind remembrance of ‘The Quiet Man’, and for your novel.

We communicated with each other for a few years more, with Andrew supplying me with Dobe’s new address when he moved from Durango to Santa Barbara for health reasons, but eventually we lost touch. Despite the way things had gone at our first meeting I still have to pinch myself that I actually met Andrew McLaglen in the first place, and that for a very small point in time we enjoyed a fleeting acquaintance.

All Posts »
PrevPreviousJohn Wayne Goes to War: Duke’s WWII Films of the 1940s
NextHarry Carey and John Ford – The Universal Years 1917 – 1921Next