Here are 5 more of my favourite cowboy western movies from the 1950s. Part 1 can be found here. 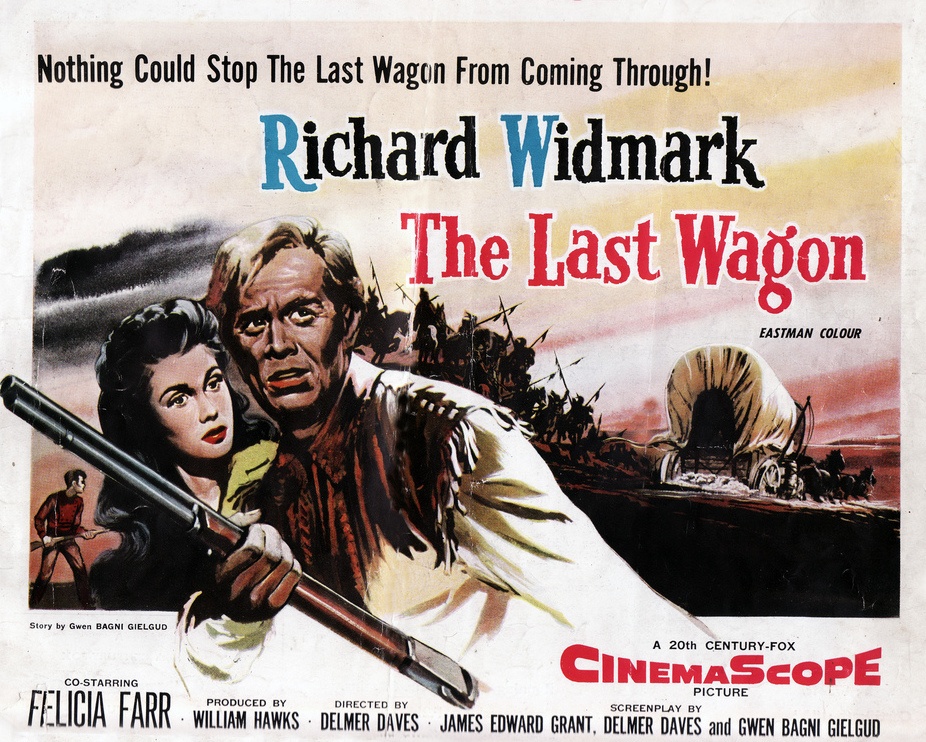 Handsomely filmed in Cinemascope, this is another Delmer Daves Western, starring Richard Widmark in the lead role as Comanche Todd, a white man who has thrown in his lot with the Indians.

Todd is the captive of a seriously deranged sheriff by the name of Bull Harper, played in a short-lived cameo by George Matthews.

Short-lived on account of Todd burying an axe in him as he attempts to escape after having been chained to a wagon belonging to a group of settlers Harper comes across.

Watching the film again recently I was struck by how violent it actually is, mainly because I’m fairly sure I caught this one in the late 1950s on my own, when I was about 7 or 8-years-old, so it must have had a non-parental guide certificate.

Mind you, Bull Harper dies the instant the axe gets him, and Widmark dispatches Bull’s brother, played by Timothy Carey, in equally instantaneous fashion, Carey dying the minute the knife goes in.

It’s not all death and mayhem though, but mostly it is.

Todd’s Comanche wife has been raped and then murdered along with their two children by the Harper’s. Todd retaliates in a fit of pique and kills three of the Harper’s, for which he is arrested by the sadistic Bull.

After axing Bull, the wagon train is attacked by Apaches and Todd unbelievably survives being thrown over a cliff with the wagon he’s still chained to. Then it gets really exciting.

Widmark’s love interest in the film is played by Felicia Farr, and her kid brother is played by Tommy Rettig.

At the time I saw the film I recognised him as the boy in the Lassie TV series. I note one of the scriptwriters is none other than James Edward Grant but thankfully he keeps the bombastic rhetoric that on occasion spoils his films for John Wayne to a minimum.

Widmark is always good, no matter what part he’s playing, and, along with the cinematography, he’s the best thing about The Last Wagon. Highly recommended. 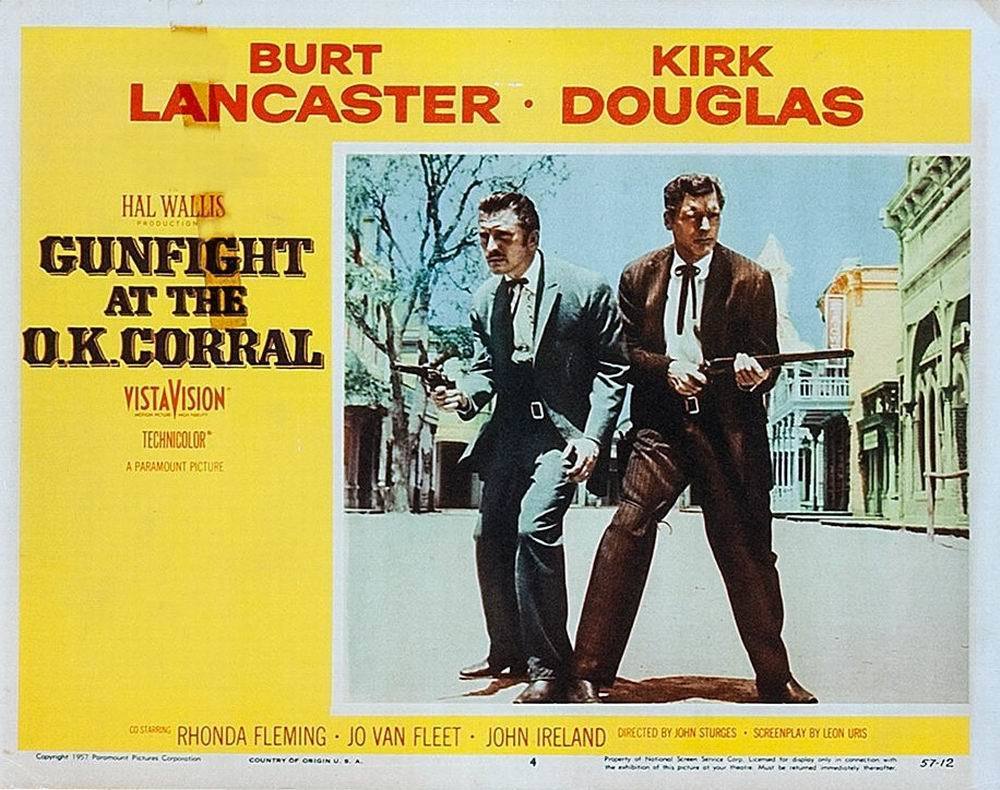 The 1950s ushered in a wave of so-called psychological Westerns, of which The Left-Handed Gun (see further down) was probably the best example.

The main requirement was overwrought performances from the principals and some kind of subconscious motivation buried deep within the psyche that pushes the characters over the edge.

The perennially tense and jittery Kirk Douglas was therefore well-equipped to play the highly-strung and agitated Doc Holliday in yet another in a long line of Earp / OK Corral movies churned out by Hollywood throughout the years.

If I were pushed, I’d have to say John Ford’s My Darling Clementine, with Henry Fonda as Earp, is the bar against which all other Wyatt Earp movies should be measured.

Watching it again a while back I noted the presence of Dennis Hopper, Earl Holliman, Jack Elam and Lee Van Cleef to name but a few in the supporting cast.

Burt Lancaster as Earp competes for acting honours with Douglas, and of course, it helps that John Sturges, who’s already been mentioned in despatches further back in this article, is calling the shots behind the camera.

I have to admit, though, that it’s really Kirk’s film, even if he doesn’t go the whole hog and cop it at the end in the OK Corral gunfight like Victor Mature did in My Darling Clementine.

Speaking of the main leads in the film, I remember back in the 1960s seeing Frank Gorshin, who at the time played the Riddler in the Adam West Batman TV series, doing a comedy routine in which Lancaster and Douglas find themselves in a shootout with Anthony Quinn and Marlon Brando.

His impressions of all four are fantastic, but his Burt and Kirk impressions were the icing on the cake. 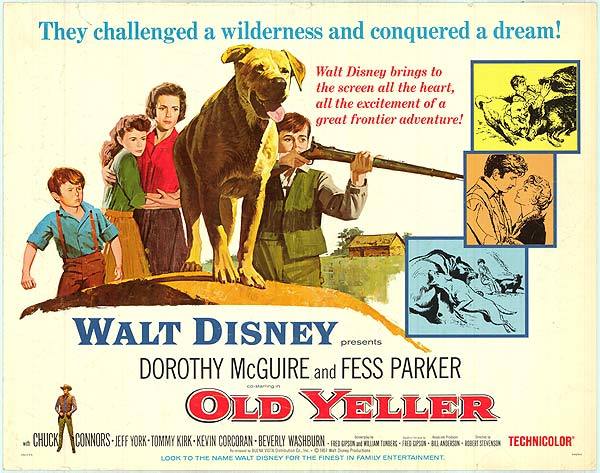 I guess this qualifies as a Western, seeing as it’s set in the 1880s.

I must have caught it at some point back in the 1950s, but probably on rerelease towards the end of the decade.

Not content with traumatising a whole generation of kids back in 1942 with the death of Bambi’s mother in the classic Disney cartoon, ole Walt then foisted on my generation another harrowing lesson in the inevitability of death.

Knowing your mother might one day fall off the perch is one thing, but discovering the family domestic pet also had its card marked for an early demise left me and a whole bunch of other kids psychologically scarred for life.

Old Yeller wasn’t all doom and gloom though. Not at the beginning anyway. For a start, what about that great theme tune? I refer to the one in the film which goes

best doggone dog in the West”…

and not the one I found on the web by someone called Joji with the following lyrics:

“Take me out to the shed, shoot me in the back of the head”

Just in case there’s a lot of you out there reading this right now who don’t have the faintest idea what I’m talking about, I’ll give you a brief overview of the plot.

Two kid brothers, played by Tommy Kirk and Kevin Corcoran, adopt a runaway dog who romps around the countryside getting into all kinds of loveable Disney situations such as helping the family to trap feral hogs, saving one of the kids from being ripped apart by a bear, then being bitten by a wolf from which the dog gets rabies after which it has to be locked in a shed before the older brother blows its brains out.

I personally don’t watch too many Disney movies these days but I’m fairly sure they definitely don’t make them like this anymore.

I read somewhere a few years back about a very stringent and tough prison warder in America who decided his guests were being treated too comfortably.

He banished the prisoners to the great outdoors where they were incarcerated behind a barbed-wire fence in the middle of nowhere.

He poured on the misery by restricting the TV cable service to one channel only. The Disney Channel. One day he heard laughter coming from a group of convicts sat in front of their small screen television.

Upon further investigation, he found they were taking great comfort from watching Old Yeller being sent to his maker.

As the Disneyland song might go, “It’s a sick world after all.” 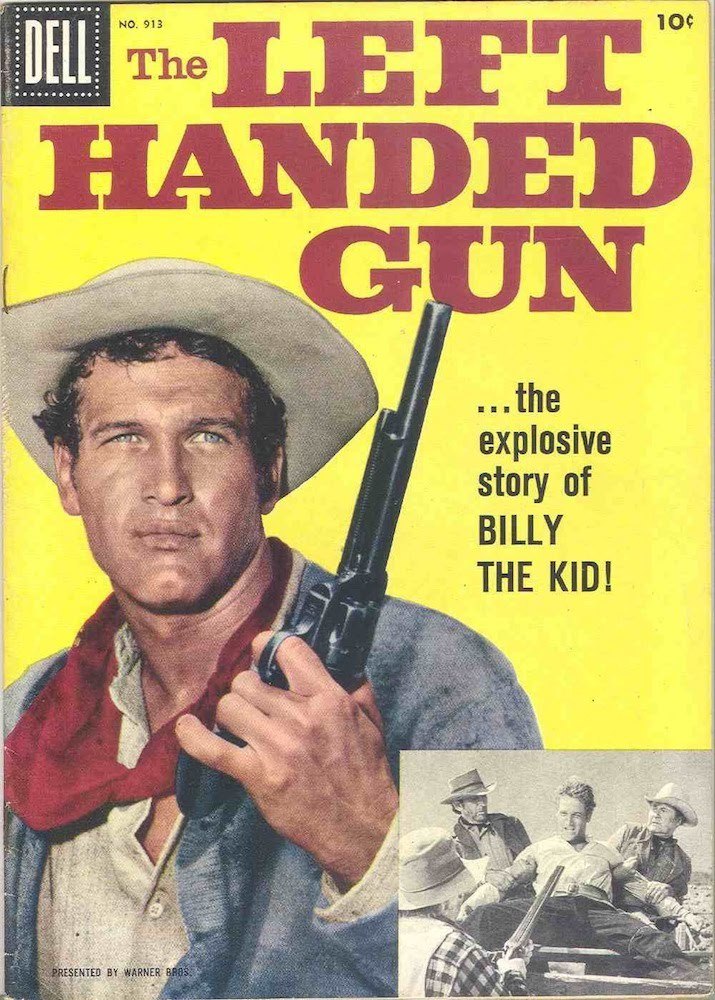 It seems Paul Newman got to hoover up a couple of roles destined for James Dean before Dean fatefully forgot to look both ways before pulling out into traffic that fateful day in 1955.

Newman played Rocky Marciano in Somebody Up There Likes Me and Billy the Kid in The Left-Handed Gun, both roles having earlier been ear-marked for Dean.

It’s hard to describe exactly why I found The Left-Handed Gun, the directing debut of Arthur Penn, a somewhat disturbing experience to watch when I saw it at the tender age of six.

I can only put it down to the Method acting style of Newman and his co-stars, something I don’t think I had encountered on the screen before.

I knew I was watching a film, and not real life, but it felt as if I were watching actual events unfold before me. It had such an effect on me that I tended not to go out of my way to watch the film again for quite a long time until I saw it again recently on TV.

It’s amazing how much audiences were in thrall to the Method acting of stars such as Brando, Dean, Newman and other guilty parties back in the 1950s.

Watching this movie again sixty years down the line I was struck by how dated, indulgent and ham-fisted the Method eventually became.

Newman’s constant emoting really gets on your nerves after a while, forever closing his eyes against some invisible pain only he can feel, slumping against the nearest wall in tormented angst, then adopting a martyred Jesus on the Cross pose after Pat Garrett finally puts him, and me, out of his misery.

Yet I found it all so utterly enthralling as a child. Thankfully, Newman eschewed the Method in later years and decided to just play himself instead, which I found much more satisfying to watch.

If you want a more persuasive portrayal of Billy the Kid then I respectfully suggest Dirty Little Billy, released in 1972 with Michael J. Pollard in the role.

On the other hand, if you’re looking for a uniquely alternative take on the story then you are morally obliged to view Sam Peckinpah’s late masterpiece, Pat Garrett and Billy the Kid, which was released the following year. Great soundtrack by Bob Dylan as well.

Avoid Young Guns I and II at all costs.

In Mark Lee Gardner’s biography on Henry ‘Billy the Kid’ McCarty (aka William H. Bonney), To Hell on a Fast Horse, the author points out that one of the few photographs taken of the Kid was printed in reverse, thus showing him with a gun on his left, not his right.

And to think how many months Paul Newman must have practised drawing with his left hand in order to ‘be’ rather than act the part. It almost makes you weep. Almost. 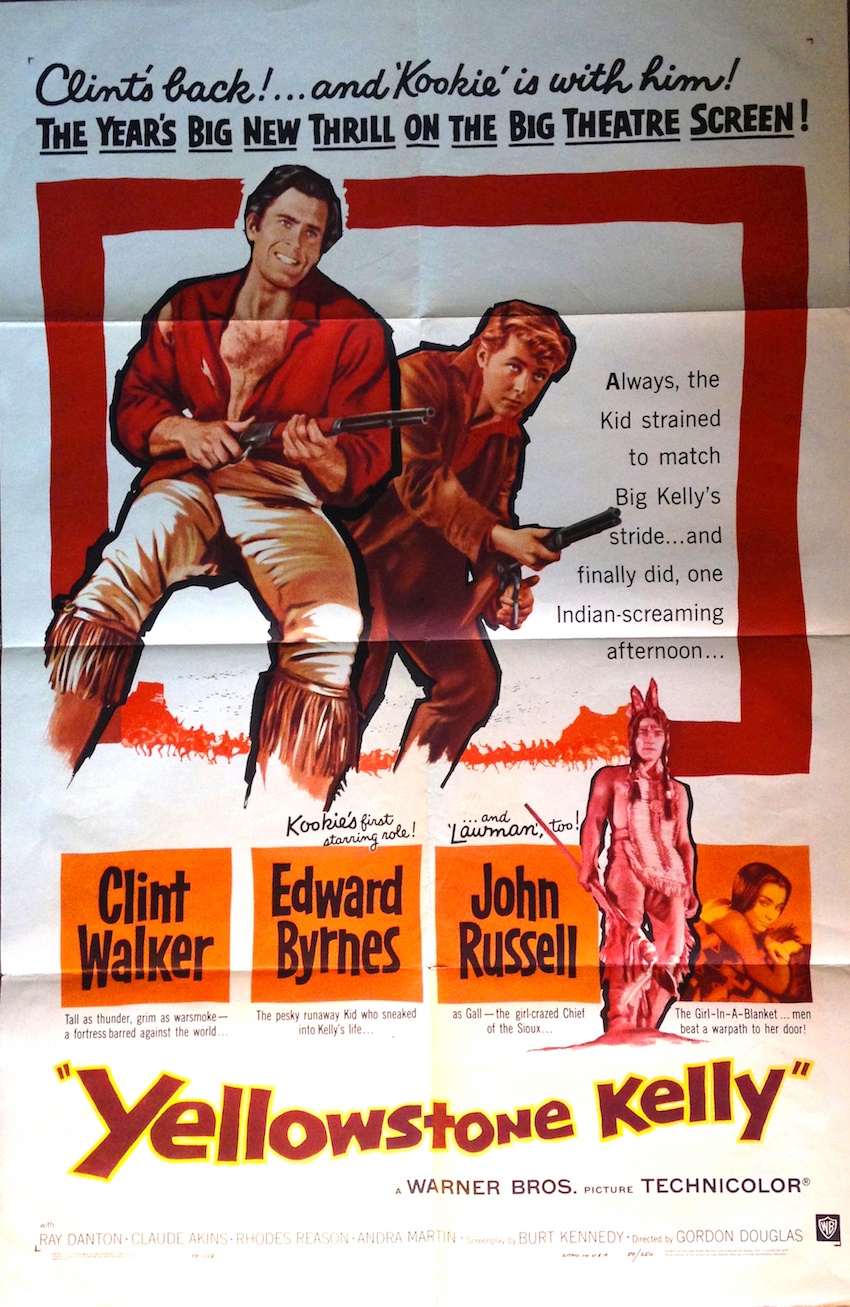 I liked this movie so much that when it became available on DVD a few years ago I purchased at least three copies, two of which I gave away to friends of a similar age who’d also seen Yellowstone Kelly when it was first released in 1959.

The main star is Clint “Cheyenne” Walker, his co-star is Edd “Kookie” Byrnes, and the supporting cast includes John “Lawman” Russell and Warren “Do I die in this one?” Oates. Throw in Claude “Joe Burdette” Akins and I’d say that’s a first-rate cast.

This being a Warner Brothers production they were eager to showcase two of their TV celebrities in the main roles, which probably accounts for its success, taking nearly 2 million dollars at the box office.

Throw in a script by Burt Kennedy and the result is an entertaining and engaging late 1950s pedigree Hollywood Western, beautifully shot in Arizona in Technicolor and directed by Gordon Douglas.

Kelly is a scout for the U.S. Army and a trapper in his spare time.

He expires in Kelly’s arms, although his quiff holds out a bit longer.

After that it’s the usual cavalry versus Sioux story, with the Sioux, for once, getting the upper hand before Kelly prevails on Chief Gall, played by a seriously miscast John Russell, to ride away and leave the cavalry to lick their wounds.

I see that some sources reckon the film was originally going to star John Wayne as Kelly with John Ford slated to direct.

Apparently, they chose to do The Horse Soldiers instead. I reckon that was a bit of a mistake by both of them, seeing as Yellowstone Kelly turned out to be the more entertaining film.

Join me for my next trip down memory lane when I recall some of the Best Westerns of the 1960s that I saw as a kid, arriving on a wide choice of hand-held devices, desktop computer or PC near you soon.