If you’re a fan who likes to watch as John Wayne mimes along to someone else’s singing voice, then this one is for you.

Looks like Duke’s gone and jumped ship and finally left Lone Star behind and thrown in his lot with Republic Studios. Let’s hope he doesn’t end up regretting it.

A change in studio should indicate a change in quality as well but seeing as Wayne’s first Republic effort also has Lone Star director Robert Bradbury on board along with some of the same actors and scriptwriters he’d also worked with previously then personally I don’t hold out much hope for too much improvement right now. Maybe I’ll be surprised.

Years after witnessing the death of his parents and the kidnapping of his younger brother, Jim, on the Buckhorn trail, John Wyatt (JW) is determined to catch the gang responsible.

He approaches the authorities and promises them he’ll rid the local state of every varmint in it. Unfortunately, the tax take isn’t enough to fund him – I’ve heard some excuses in my time but this beats the proverbial band – so JW decides to organize his own band of men to take on the bandit gangs terrorising the decent men and women of whatever state JW seems to want to clean up.

He does this by leaving an anonymous letter with those who have suffered at the hands of the many outlaws that run rings around local law enforcement, kind of like an early version of “The Magnificent 7”, only JW ends up with a slightly larger gang of his own which he names the Vigilantes.

They end up being known by another name, “The Singing Riders”, meaning JW has inadvertently created his own singing cowboy group, an act so bad it looks as though they’re going to try and sing the bad guys into surrendering of their own accord if only the Vigilantes would give up their guitars in return.

They decide to go visit the nearest town to grab themselves a refreshing glass of sarsaparilla whilst singing “Riding down that rocky road”, unaware that the town is being robbed by a group of varmints.

One of the townsfolk approaches the singing riding cowboys and tells them “Black Bart’s gang has just robbed the express. That’s them yonder.” JW and the boys take chase and round up the gang, our hero interrogating them as to the whereabouts of the gang that “rode the Buckhorn trail about twelve years ago”, but no information is forthcoming.

JW hatches a cunning plan to join a cowherd in the hope it will prove bait for the hornswagglers what did for his ma and pa. Enter screen right a stranger belonging to the very gang JW has been looking for, with the intention of helping to steal the herd for his boss, Ballard.

The complication is that – gasp shock and horror – the stranger is actually JWs long-lost bro, played very badly by actor Frank McGlynn Jr..

The shock and horror quotient is then ramped up to eleven when JW picks up a guitar and mimes an awful dirge for trail girl Mary, the daughter of the herd owner. The fact it’s so obviously not Wayne singing actually makes the sequence quite painful to watch. And hear. Mary is obviously tone deaf because she actually asks him to sing it again. 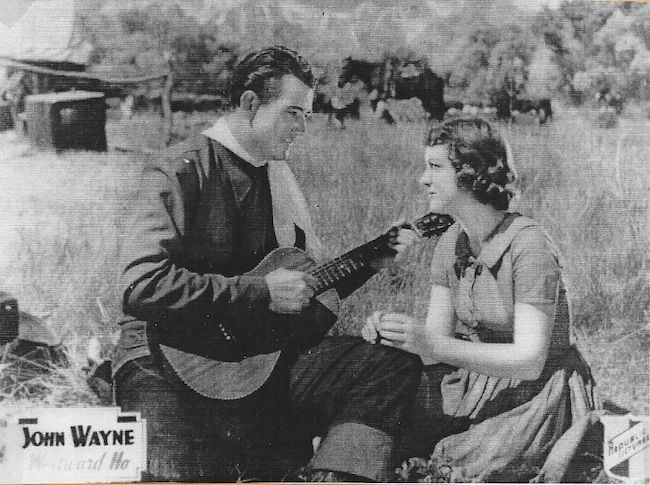 Duke notices that Jim, unaware he’s his brother, has suddenly wandered off. Jim has gone to go warn Boss Ballard and the Boys that JW looks kind of suspicious, but seeing as he wandered off in the middle of the song you wonder if that was the real reason he left.

The following day the herd is saved from Ballard and his gang by the Singing Riders who wantonly kill most of them, as opposed to singing them to death.

Duke is just happy to get bad guy Yak Canutt to tell him that Ballard was responsible for the murder of his parents. Off he goes in pursuit of Ballard and ends up raisin’ a ruckus in the local saloon.

Chased out of town by what’s left of the local thugs our hero appears to chance upon his own gang, the Singing Riders, out in the middle of nowhere. It’s a strange sequence in which it looks as though the Riders have just been sitting astride their horses waiting for JW to appear and lead them off on their next adventure without any previous communication between the separate parties.

The apparently endless supply of bad guys means that there’s further plotting and double-dealing on behalf of Ballard, JW’s brother helping matters by kidnapping Mary in an attempt to entrap Duke and the Riders. It all comes good in the end though.

Jim finds out he and JW are brothers, Ballard gets his just desserts like the mangy dog he is then, because Jim has also fallen for Mary, thus creating a love triangle, the younger brother has to, of course, die. Which he does.

I can’t say it’s that much of an improvement on the sixteen or so Lone Star Westerns JW labored on prior to this film, but it does appear to have some pretty spectacular locations, including an area that I think is known as Owens Valley in California.

There’s also quite a lot more action on show here than before so I’ll give “Westward Ho” a cautious thumbs-up until I’ve seen more of these Republic efforts.