Here is another review of a 1930’s western with John Wayne as a “singing” Sandy Saunders. This time it’s… 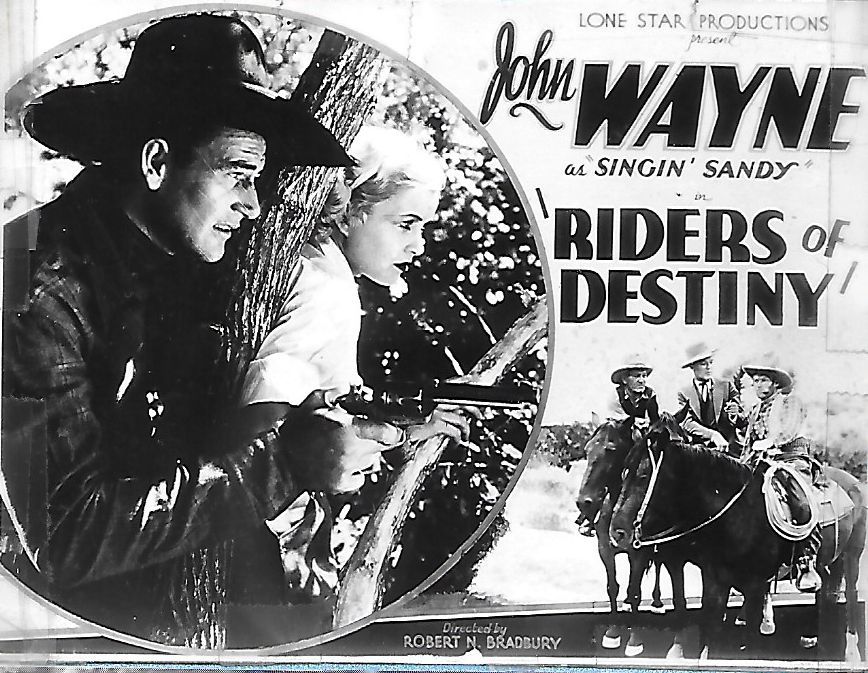 There’s some good news and some bad news.

The good news is that John Wayne and Leon Schlesinger have finally parted ways, thus ending a cowboy series of rather dubious quality.

Now for the bad news.

You know how when you were really young and you dreaded the arrival of that smelly aunt who would pinch your cheeks, pat you on the head so hard you’d have a migraine for weeks and tickle you to the point where you nearly ended up soiling yourself?

Now take that thought, multiply it by a hundred, and you’ve got some idea of how much I’ve dreaded the thought of having to watch John Wayne as Singin’ Sandy Saunders.

After JW lip-synchs to a catastrophe of a melody about a bold outlaw taking away someone’s gal, he comes across a sheriff wandering through the sagebrush on foot who appears to collapse after hearing Singin’ Sandy’s singin’, although I’m thinking the bullet hole in his back may have played some part in it too.

Sandy gives the guy some water and promises to take him to the nearest town. In the next scene however, no town and no sheriff.

Instead we find Sandy riding alone then inexplicably taking the blame for a woman who has held up the stagecoach and lost her horse in the process.

This is then followed by the appearance of two inevitably tiresome comic reliefs called Bert and Elmer, although it’s slightly refreshing to see they’re in cahoots with the villain this time, rather than the hero.

Apparently the stagecoach keeps getting held up, so the lady bandit, Fay, played by Cecilia Parker, who holds a half share with her pa in a mine, steals the money due to them from the mine before it can be stolen by someone else.

When Sandy foils a plot by the two idiots to bushwhack him he ties them up then delivers the hapless duo to the villain, Kincaid, played very badly by Forrest Taylor.

Sandy’s calling card is a brief reprise of the earlier song, in which he sings of “blood a-runnin’ in town before night”.

Luckily for him, he chooses a song in a more lighter vein when serenading the lovely Fay later on, although it’s still pretty bad.

Despite this, Fay’s father, obviously a fully-paid up member of the local tone-deaf society, proclaims that he could “listen to it all night”.

Fay, a co-member of the same club as her father, declares she also enjoyed Sandy’s “singin’” as well and requests another song. Thankfully, the scene fades just as JW starts tuning up again on his geetar.

It was at this point that I suddenly realised the father is played by none other than George ‘Gabby’ Hayes. I didn’t recognise him at first seeing as he was clean-shaven, had a decent haircut and enunciated to perfection, but the missing teeth gave him away.

Kincaid holds the rights to all the water in the valley and is trying to force the local ranchers to sell their land to him for a pittance, making them an “offer they can’t refuse”, which is kind of weird seeing as Kincaid is definitely not in the oil importing business.

The ranchers have already pleaded with the government to send someone to look into all this dastardly chicanery. The government responds by sending – wait for it – Singin’ Sandy himself.

Later on, Sandy shoots Kincaid’s hired gunman in the wrists after the killer, presumably tired of the constant singing, tries to put Sandy out of the music business. Our hero then turns double agent, partners up with Kincaid, and eventually takes the villain down.

The missing sheriff finally turns up, having deputised Sandy then recuperated from his wounds out of town somewhere. I’m glad that was cleared up before the end, and I’m glad the end arrived before Sandy started singin’ again.

Not for the faint of heart I’m afraid.