“The New Frontier” should not be confused with the later 1939 John Wayne / Republic vehicle “New Frontier”, which was retitled “Frontier Horizon”. Glad we can clear that one up. Read on, pardners.

I’m tempted to recycle an old joke along the lines of “how many ears does John Wayne have? Answer: three – a left ear, a right ear and a new front ear”, but I’d like to think those of you who stumble across these ramblings of mine are above such nonsense. Maybe not though.

Set in 1889, the story begins with the President of the USA Benjamin Harrison signing off on a land grab whereby the white settlers can lawfully steal large swathes of America from the indigenous natives in the name of Manifest Destiny, which thinking about it might have made a better title for the film.

From this land grab arises a new town on the new frontier in a town imaginatively christened as Frontier. The place turns out to be in need of someone capable of bringing law and order to the streets so who do you reckon the townsfolk call on to be the new sheriff? 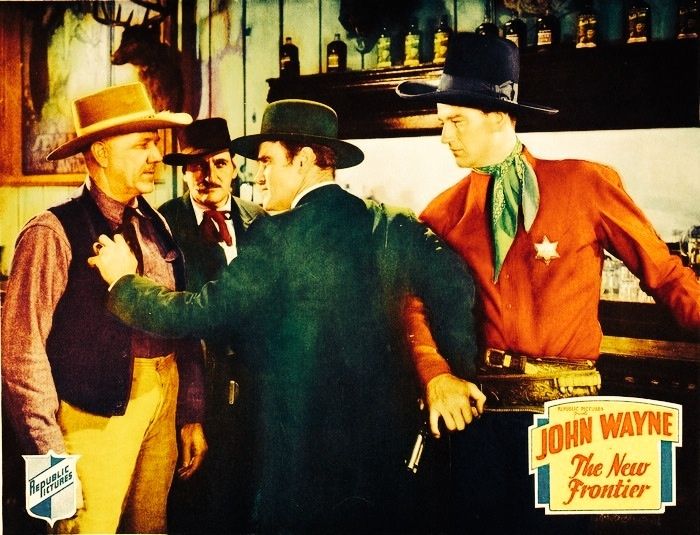 That’s right – a guy called Milt Dawson, played by Sam Flint, the man who helped lead the first wagon train that brought the people who then built the new town of Frontier and who also happens to be the father of JWs character, John Dawson.

Milt wisely turns the job down then unwisely decides to tell the local villain, Ace Holmes, played by Warner Richmond, to keep the noise down anyway.

Milt doesn’t even get to make it out of Ace’s saloon before he succumbs to a serious case of lead poisoning, administered in the back by a murderin’ varmint of dubious parentage. Meanwhile, Milt’s son is leading a wagon train of more settlers to Frontier.

On the way, they’re attacked by a group of outlaws looking for food.

When the leader of the gang, Kit, played by Al Bridge, realizes that JW is the lead scout for the wagon train, he offers to pay for the food instead, on account of JW having helped him out when Kit was wounded some years before.

These outlaws are idiots and spoilt idiots at that. Unless I’m mistaken there was plenty of food available for taking out in the wilderness back in those days, mainly in the shape of wild animals and such, but they want to help themselves to food already processed and prepared by the settlers. Shame on them.

When JW finally hits town and finds out he’s now an orphan he takes on the role of sheriff then walks the mean streets of Frontier lookin’ for the gutter trash that done killed his pa.

When he confronts Ace in the saloon both of them are treated to a couple of closeups more in keeping with a Sergio Leone film, with JW looking like he’s out for trouble, and Ace sure looking like he’s going to oblige.

JW tells Ace to close his saloon by six, otherwise, he’s destined for the hoosegow.

Instead of shooting him in the back like he did his pa, dastardly Al sets JW up by luring him to meet a stranger who offers to give up the name of his pa’s killer.

Realising that he’s been set up, JW gets the drop on one of the gang who was threatening to drygulch him, then sends him on his horse towards the killers laying in wait.

They then shoot their own man, echoing a similar scene from the much later “Rio Bravo”, demonstrating yet again how much directors like Howard Hawks weren’t afraid to recycle ideas from older films.

JW faces Ace down at the saloon and gets thumped over the head for his troubles. Just as Ace is about to finish our boy off, that nice outlaw guy Kit turns up and saves the day.

In what turns out to be quite a spectacular climax, the opposing forces shoot it out with each other and end up burning down most of the town in the process.

Apart from a couple of funereal dirges interpolated into the action in the style of the Singing Riders from “Westward Ho”, and an inconsequential leading lady and JW squeeze played by Muriel Evans, I’d say the Republic efforts are starting to look rather more entertaining than the Lone Star JW vehicles.

There’s definitely more action to be had, and it’s good to see some more adventurous moves with the camera than usual.

All-in-all I’d say things are starting to look up when it comes to my future viewing experience of the large number of JW 1930s films still left to review.

I hope so anyway.

As always, let us know what you think of the review. And if you want to read more John Wayne 1930s reviews.