Having now made my way through all of the existing Westerns that John Wayne performed in for studios such as Warners, Lone Star and Republic from the early 1930s until 1939, I thought I’d revisit the last four of the Mesquiteer films that JW starred in before fame finally arrived via “Stagecoach” in the same year.

These following reviews were rather shorter than those I later delivered so I thought I’d bundle them up into a classic double-bill format starting with “The Night Riders” / “Three Texas Steers”, with “Wyoming Outlaw” / “New Frontier” to follow at a later date.

“The Night Riders” is the fifth outing for Duke as Stoney Brooke in the ongoing saga of The Three Mesquiteers.

All of the films in which he played Stoney were directed by George Sherman, who directed the late career classic Western for the actor, Big Jake, over 30 years later. 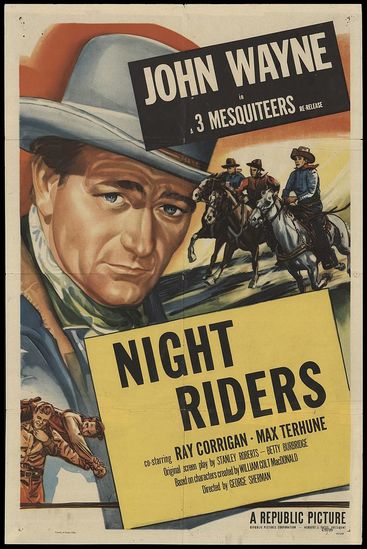 The other two Mesquiteers are played by Ray ‘Crash’ Corrigan as Tucson Smith and Max Terhune as Lullaby Joslin (I also see Tom Tyler in the cast, who played killer Luke Plummer in “Stagecoach”, settling for a part as a villainous enforcer).

Together, the three of them ride the range writing wrongs and basically punching the lights out of anyone who gets in their way.

And they punch out a lot of lights.

The films, formulaic and utilising lots of stock footage, usually come in at about just under an hour so the action flows quick and fast and the storylines, by necessity, are fairly uncomplicated.

In “The Night Riders”, a crooked gambler disguises himself as a Spanish landowner – ominously referred to as the Don – with the help of a forger and misappropriates a whole passel of land from the rightful owners.

He then imposes a land charge on the homesteaders and therein lies the conflict that brings our heroes into the frame, on account of their ranch is also on the disputed land.

Homesteaders are forced to give up their homes for not paying the tax imposed by the false Spaniard.

If you wanted some kind of cultural reference for the film you could argue it invokes the plight of the farmers during the great depression of the 1930s – but I’m not sure you could apply that kind of social conscience subtext to this movie.

At some point in the film, the Three Mesquiteers become the Three Masked Merry Men instead, robbing the rich and giving to the poor.

They are dubbed ‘Los Capaqueros’ which as everyone knows is Mexican for ‘those who wear curtains for capes’.

It’s all going along quite swimmingly when suddenly the whole film takes what I can only describe as a very surreal turn that I was totally unprepared for.

Whilst the Mesquiteers meet with the Don under the guise of wanting to join the posse tasked with tracking down Los Capaqueros, Lullaby produces a dummy and proceeds to perform a ventriloquism act which is totally out of synch with the rest of the film.

For a start, where, in the name of Educating Archie – or Edgar Bergen for our American readers out there – did he keep the dummy?

It certainly wasn’t strapped to his horse the last time I looked. It’s a cinematic mash-up of B-movie Western meets David Lynch.

The story is stretched to further credulity when the Mesquiteers chance upon real-life President Garfield, who gives them the go-ahead to take down the Don, although he can’t be officially involved.

This leaves an informed audience sighing a big ‘uh-oh’ on account of the fact that the real President Garfield was assassinated after less than a year in office. I mean, what are the odds, right?

The climax of the film involves the Mesquiteers being executed by firing squad but we all know that’s not the end as they all come back in the following film. Apart from President Garfield of course.

We know that the previous Mesquiteer film is set in the 1880s on account of the presence of the ill-fated President Garfield, who was assassinated in 1881. 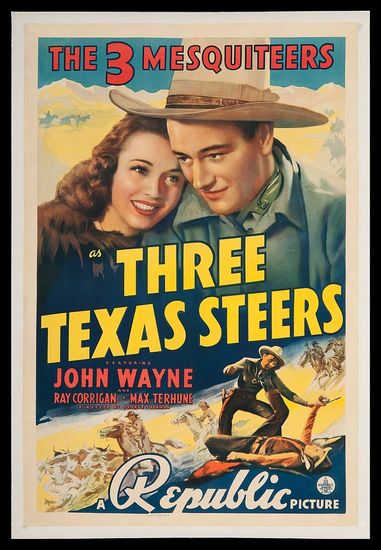 If that’s the case, how come the circus audience in this film look as though they’re dressed in what looks like 1930s garb, and not the latter part of the 19th Century?

I also spotted a gramophone playing a vinyl recording of The Blue Danube, a telephone and a motorised jeep with caterpillar tracks that is used to haul a racing horse to the local track heavily populated by racegoers dressed in 20th century business suits.

After someone refers to a jitterbug contest I decided to just give up and go with the flow – it was easier that way.

The basic story involves a crooked circus manager who contrives to close down a travelling circus run by his boss, Nancy, who also owns a ranch that’s worth a lot of money, and the business manager intends to get his hands on that ranch through devious means.

When the circus goes bust – cue a fairly impressive montage sequence worthy of Eisenstein when the big tent catches fire – the now unemployed Nancy returns to her ranch but mistakenly goes to the home of The Three Mesquiteers, who own the 3 – M ranch.

Apart from the fact that the Mesquiteers nearly lose their ranch – Stony Brooke becomes Stoney Broke – that’s about all of the plot I’m prepared to go into.

Nancy is accompanied, amongst others, by a large gorilla and a midget.

To try and distract said gorilla after it picks him up, the increasingly tiresome Lullaby pulls the old ventriloquism act to frighten his attacker.

The weird thing is that the dummy actually moves even though there’s no one to operate him. I always thought those things required an arm to be shoved up where the sun don’t shine in order to animate them. Obviously not.

And we get to understand why he’s called Lullabye. He sings his dummy to sleep. I swear the only thing missing from these films that I’ve seen so far is FBI agent Dale Cooper sitting round a campfire and declaring he’s just drunk a ‘damned fine cup of coffee’.

A couple of things to note in the world of the Three Mesquiteers. Republic recycles the same actors playing the same characters, Ethan Laidlaw repeating his turn from the previous film as a no-good hornswaggler.

Also, absolutely everyone in the film who carries a gun is a lousy shot. Not one of them is capable of hitting a barn wall from ten paces, which is why I guess there’s a fistfight almost every five minutes.

What with Wayne and the boys losing the mortgage on the ranch and then in quick succession losing the money they got for the mortgage, then finding a letter proving the circus business manager is corrupt before then losing that letter as well, I’d be inclined to redub them as The Three Stooges instead.

Comment below – especially if you’ve seen the movies. What d’ya think?