John Wayne revisits old territory as an undercover agent called John Wyatt required to infiltrate a counterfeiting gang who work under the guise of a travelling medicine show. 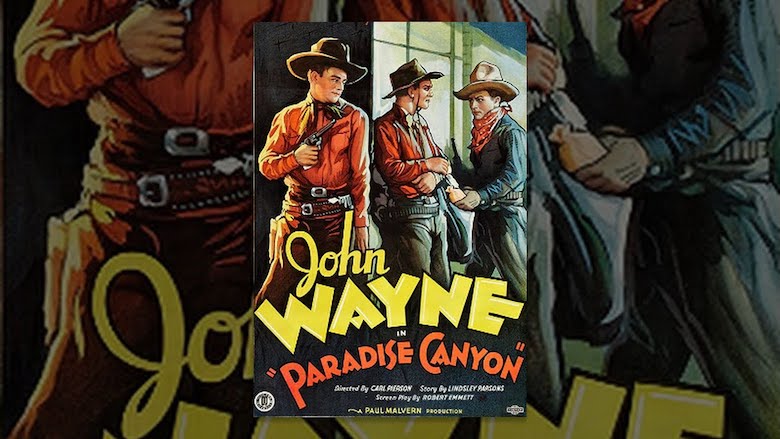 The only difference between “Paradise Canyon” and the many other previous films in which JW worked secretly for the government is that this time he also ends up working down Mexico way. This can only be a good thing for Duke seeing as he was always fairly partial to the ladies from that part of the world.

Although the film is firmly anchored in the modern-day West, which I figured out by noticing that the medicine show vehicle is actually a large lorry, the script by Lindsley Parsons, who also wrote scripts for “Desert Trail” and “The Man from Utah”, introduces more of a comedy element than usual.

Earle Hodgins as Doc Carter, who runs the medicine show, is a real standout character, accompanied by his daughter Linda, played on an immediate return visit from the previous film by by Marion Burns.

The medicine show personnel are rounded out by Mike and Ike, who comprise an act of questionable talent called the “Texas Two”. Rather inexplicably, JW as John Wyatt seems to want to work under a pseudonym, introducing himself to the crooked medicine show participants as – wait for it – John Rogers.

So we have John Wayne playing John Wyatt aka John Rogers. He’s a secret agent for Heaven’s sake. He doesn’t need a pseudonym.  The clue is in the word “secret”.

Doc Carter offers JW a job after he helps the crooked medicine show crew get over the state line where they can’t be pursued for unpaid bills by the sheriff.

My blood froze for a moment when Doc asks JW if he can sing or dance, on account of unchecked memories of Singin’ Sandy still causing me to cry out in my sleep. Luckily JW admits he can only shoot and ride, after which I crossed myself and thanked the Lord for a lucky escape.

Yak sends some of his henchmen off in pursuit of Doc but they’re foiled by John Wayne Wyatt Rogers who rather strangely let’s them off when he’s told they were just playing a trick on the medicine show people. I say rather strangely because the bad guys were actually trying to shoot everyone dead. If that was just a trick, I’d hate to see what they’d have done if they meant business.

Everyone ends up at the same time in a town in which the Mexican border runs right through the middle.

Just in case anyone loses their bearings, a number of the hombres in the Mexican part of the town wear sombreros, as only Mexicans can.

Yak, on the Mexican side, tells JW that he and the medicine show should stay on the American side of the border, otherwise there’ll be trouble, see?

Mike and Ike turn out to be singers, although I use the term loosely, who serenade the townsfolk with a song called “When We Were Young and Foolish” that features the memorable last line, “You can never trust a woman from six to sixty-three”.

They also sing another song entitled “Snap Those Old Suspenders Once Again”. I must see if they’re available for streaming on Spotify. If so I’ll add them to a new folder called “Feminist Songs for the Unenlightened”.

JW decides to see if he can get Yak arrested by the Mexican police. On the Mexican side of the border he approaches the sheriff, played by a Gino Corrado, an actor who makes no attempt at all to disguise the fact that he’s actually Italian.

The federales take on Yak’s gang, shooting most of them in the back, whilst JW punches Yak into submission before taking him back across the border to be arrested by the American authorities. All that border crossing and not one great big wall in sight.

Right at the very end, JW and Linda wait in vain for Doc to turn up for their wedding, but he’s been too busy helping himself to the medicine he’s been selling, which is labelled as 90 percent proof.

This would be deemed quite sad if a scene like this were to appear in a contemporary film, but in “Paradise Canyon” it’s treated as a comedy sequence. Different times, my friends, different times.

Didn’t turn out as good as I was hoping it would. Medium John Wayne fare at best.