The movie that finally put paid to the career of a one-time movie superstar – and we don’t mean John Wayne.

This one had me intrigued from the word go seeing as the female lead is played by none other than actress Louise Brooks who, a number of years previously, became an international star with her close-cut stylish bob-cut hair and a leading role as Lulu in the 1929 German movie “Pandora’s Box”. 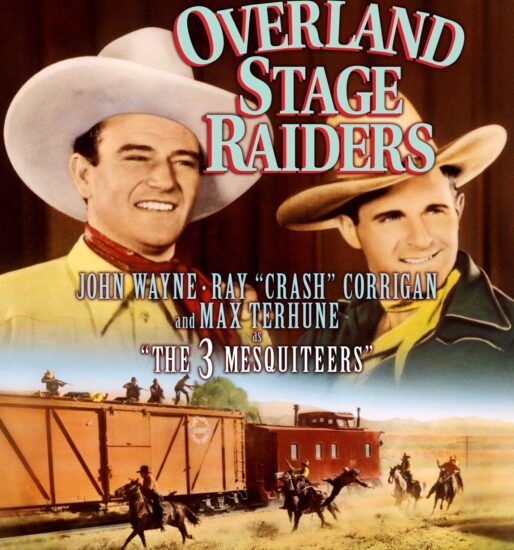 The beginning of the film comes across like a very early attempt at a Tom Cruise / “Mission Impossible” gig, with JW as Stony Brooke parachuting out of a plane in order to stymie a stagecoach holdup, which he manages to accomplish with the aid of the other two Mesquiteers Tucson and Lullaby.

Seeing as this is one of those modern-day Westerns it shouldn’t come as a surprise when Sandy tells Lullaby to “stay with the bus” instead of “stay with the horses” when he and Tucson ride off after the outlaws.

This is because the “stagecoach” actually is a bus, albeit so slow the robbers manage to overtake it on their horses before the Mesquiteers foil their plans.

Stony decides to get into the airplane business, as all cowboys do, and makes an offer to transport gold for the town of Oro Grande by plane as opposed to a very slow bus.

He does the rounds of the local cattleman, beseeching them to throw money into the hat by selling their cattle in order to raise finance to run the new airline service.

The Mesquiteers buy into an existing service run by Ned Hoyt, played by Anthony Marsh, and his sister Beth, played by the aforementioned Louise Brooks, almost unrecognisable with long black hair.

Into the picture comes Mullins, played by Gordon Hast, owner of the bus company which will obviously lose business to the new airline.

He’s also behind the bus robberies being carried out by the gang of outlaws encountered by the Mesquiteers earlier.

At the same time a new pilot, Bob, played by John Archer, turns up and gets the job as co-pilot to Ned, leaving embittered radio pilot Joe, played by Archie Hall, to vent his frustration at losing out the job to newcomer Bob.

To complicate matters it turns out Ned and sis are operating under assumed aliases after Ned was convicted for a crime he didn’t commit.

Mullins gets the gang to hi-jack the train onto which the cattle are being taken to market after which the whole film veers off into the ridiculous when Elmer the dummy pops up, ridiculous because everyone, including Wayne, converses with the blasted thing as though it’s real. 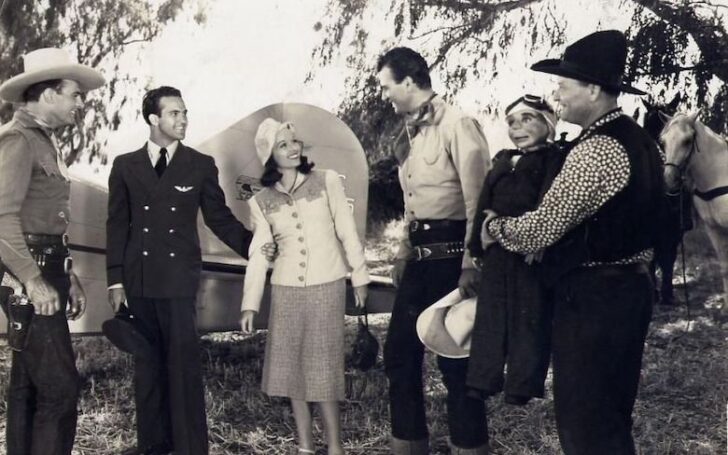 God only knows what was going through former movie superstar Louise Brooks’ mind at this point but it must have been pretty definitive seeing as this was her very last screen role. Damn that dummy.

Hearing that the cattle have been rustled, the Mesquiteers ride to the rescue and retrieve the stolen animals. During the course of the chase, Stony displays a hitherto unknown talent as a train driver by stopping the locomotive after what is actually quite an entertaining chase sequence featuring a couple of impressive horse-riding stunts.

Not to be thwarted, Mullins hires a couple of goons to hijack Ned’s plane after finding out it’s got one-hundred-thousand dollars of gold bullion on board, in the process murdering new co-pilot Bob.

Seeing as it’s also now a passenger service as well, the occupants are thrown out in mid-air, although the goons provide them all with parachutes almost as an afterthought.

To all and sundry it looks as though Ned has disappeared with the gold and when it gets out that he’s been working under another name it’s down to the Mesquiteers to save the day.

After working out that wannabe co-pilot, but still radio operator Joe, is in on the robbery they trick him into giving the game away as to the location of Ned and the hi-jacked plane which has run out of gas.

Overpowering the villains holding Ned captive, Stony and the boys start refilling the plane when Mullins and his gang turn up and start blasting away with their guns, the dangers inherent in shooting at an airplane that has just been refueled with gallons of oil obviously lost on all concerned, including the scriptwriter.

The under-used character of Beth manages to let the sheriff in on what’s happening and, after the obligatory chase in which Mullins and the gang receive their just deserts Stony, Tucson, Lullaby and Elmer the dummy get to run their very own airline.

I severely doubt that their efforts at entrepreneurship feature in the next Mesquiteers adventure though. I’m also hoping the dummy doesn’t either.