Taking over the lead role of Stony Brooke from Bob Livingston who played the character in all but one of the previous sixteen entries in the series, this is the first of eight Three Mesquiteers films that JW made for Republic before he hit paydirt in “Stagecoach”. 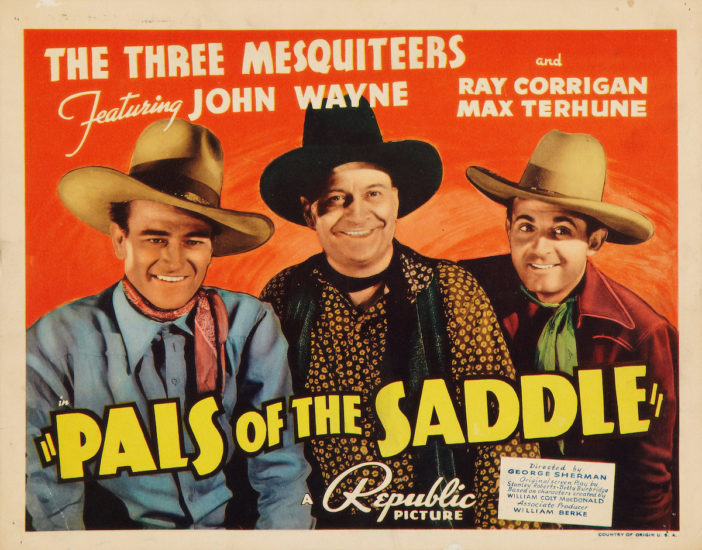 As with a number of other low-budget five-reeler cowboy films of the time, the series jumped about a bit in terms of historical timeline, “Pals of the Saddle” beginning with a montage of modern battle images that appears to be representing WWI but then introduces a newspaper headline declaring that “Congress Passes Neutrality Act”.

America actually passed four Neutrality Acts between 1935 to 1939, placing the story somewhere in between those years.

The plot revolves around a poison gas called Monium, on which an export embargo is placed by the authorities. It’s already beginning to sound like one of those complicated trade federation subplots from the lamentable Star Wars prequels, and we’re barely two minutes into the film.

Eventually, our heroic trio, The Three Mesquiteers, hove into view.

There’s Stony in the middle astride his magnificent white horse, with his faithful companion Tucson Smith, played by Ray Corrigan, to the left of him, whilst to the right we see comedy relief Lullaby Joslin, played by Max Terhune, holding a dead kid in his arms.

Having reviewed a later Mesquiteers film a few years ago called “The Night Riders”, I realised it’s not a deceased youngster after all; it’s actually a ventriloquist’s dummy called Elmer, which is a bit of a relief seeing as I was going to abandon the review right here.

Meanwhile, a sneaky looking feller by the name of Paul, played by George Douglas, goes riding in the country with the lovely Ann, played by Doreen McKay.

After a little spat, Ann’s horse bolts and she is rescued by white knight Stony, who is rather perplexed when Ann doesn’t appear to be too grateful for being rescued in the first place. Lucky it wasn’t Elmer who took off after her. She’d be dead by now.

Ann changes her tune about being saved once the boyfriend turns up, thanking Stony effusively before riding off with lover boy back to the local dude ranch.

It is then revealed that Paul is a foreign agent who has been tasked with smuggling the deadly Monium out of the country. Then things start to really take off as – hold on to your ten gallon hats.

We find out that Ann is also an agent working undercover to help root out whatever dastardly business lover boy is involved in when he turns up at Ann’s hotel room just as she’s meeting with one of her fellow agents and the new guy shoots lover boy dead in self-defence but he’s wounded and jumps out of the window just as Stony is about to return a small pistol Ann dropped after he rescued her and at the sound of the shots he bursts into the room and lets a bullet fly at the other agent but Ann knocks his arm down so that he doesn’t kill her secret agent friend then all of a sudden practically half the hotel turns up in Ann’s room and she lies and says Stony is a thief and a killer what with Paul lying dead on the floor and before you know it we’re in the land of “JWs done gone get hisself framed” again or, as the weird guy with the dummy says to Stony, “You git yourself in the doggonest jams”.

Considering the main premise of the film revolves around a chemical weapon that could possibly kill millions of people it’s all rather farcical if truth be told, but when you’re watching a guy operating a dummy that he converses with while there’s no one else around then any attempt at seriousness kind of goes straight out the window.

Whilst on the run Stony finds the mysterious Ann in a cabin tending her wounded fellow agent who also, as she mentioned earlier on in order to throw people off the trail, happens to be her intended.

Either way, it’s a short engagement as the poor guy expires, but not before spilling the beans on the who, what and why of how the Monium is going to be smuggled out of the country.

Now that Stony is wanted dead or alive they take the corpse to the local sheriff’s office, JW in disguise as what can only be described as an outlaw hick with an intimidating five o’clock shadow, and convince everyone the dead guy is Stony himself, leaving the real Stony and secret agent Ann free to track down the bad guys.

Stony eventually reunites with the other two Mesquiteers after which a ten-minute wagon chase sequence then ensues, thankfully with the dummy nowhere in sight, with some fairly spectacular stunts well worth waiting for.

Naturally, the villains are defeated, which they probably deserve after one of them actually says “Get back to your wagons men, and we’ll circle the pass”.

The cavalry come to the rescue in the nick of time and there’s a little bit of a surprise at the end when Stony doesn’t actually get the girl.

As Walter “Stumpy” Brennan might say of this film – “It’s a good’un”. Apart from that weird dummy.

Have you seen Pals of the Saddle? Let us know what you think in the comments.