Barely five minutes into the film and stranger-in-town John Mason, played by John Wayne, is already engaged in a bout of fisticuffs with one of the locals, Ben McClure, played by Reed Howes. 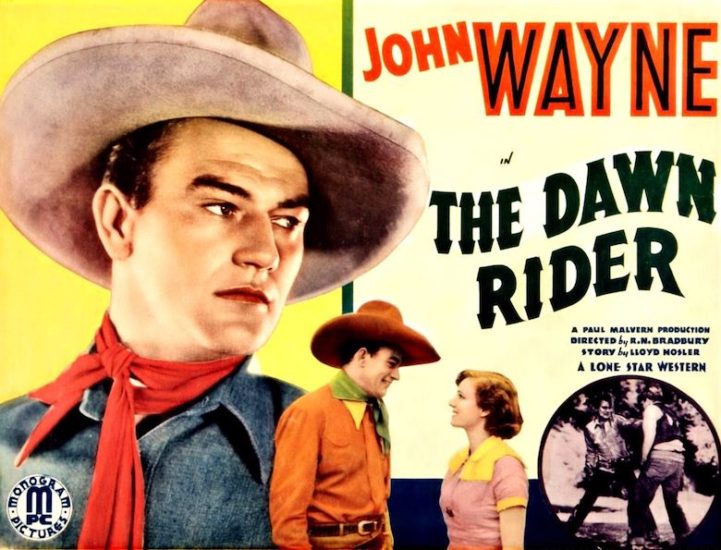 They punch each other to a standstill then end up as friends as they have a drink together in the nearest watering hole, a scene Wayne would play over and over again in later films such as “The Quiet Man”, “Donovan’s Reef” and many more besides. Coincidence being the main ingredient as usual, it turns out Ben works for JWs dad, old man Mason.

JW and his new mate Ben arrive at the office just in time to be held at gunpoint and end up witnessing the murder of poor old man Mason. JW gives chase to the departing gang, shooting three of them in the back.

Yes, you read it right. John Wayne shoots three men in the back, but his halo remains intact on account of his victims are obviously no-good scum-sucking varmint trash what deserved all they can get. And I’ll fill anyone full of lead who says otherwise, gosh-darn it.

JW takes a bullet from the rest of the gang and is trundled off to the nearest doctor to recover.

Going away from the story for a moment, I know these films are generally referred to as Poverty Row productions due to the paucity of their budgets, but this is the first one of these films I’ve seen in which a woman, in this case, local town gal Alice, played by Marion Burns, wears a dress that looks as though it’s been made from the same material as the curtains behind her.

There’s a touch of “Liberty Valance” about the story, poor old Ben ending up with a case of the Tom Doniphon’s when it comes to unrequited love for Alice, who in turn is in love with JW, here cast in the role of Ransom Stoddard.

The situation is further complicated by the fact that old man Mason’s killer is none other than Rudd Gordon, the brother of Hallie – sorry, Alice. If the love triangle isn’t resolved by Ben having to die, then I’ll eat my ten-gallon hat.

Rudd and the nefarious saloon owner, played by Yakima Canutt, decide to try and stir things up a bit between Ben and JW, Yak telling him he thinks JW is taking too long to recover from his wound and using it as a cover whilst he “makes love” to Alice.

I’m assuming that phrase didn’t have the same connotation in 1935 as it does these days, even though it still gets Yak a biff on the nose by an offended Ben.

JW recovers enough to take on the role of shotgun for the latest gold shipment from the town, replacing the gold with rocks in an effort to thwart the gang that’s constantly been holding it up every single time.

As JW prepares to set off he and the driver, who also happens to be the sheriff, realize they’ve got a couple of outlaw stowaways in the back of the wagon. There follows a fairly exciting chase sequence in which JW turns the tables on bad brother Rudd and tracks him down to Alice’s ranch.

By the time JW gets there the brother has moved on and JW and Alice argue, forcing JW to put his arms around her to stop her being angry with him. At that very moment, wouldn’t you just know it, Ben turns up intending to ask Alice to marry him, see’s Alice in JWs arms, puts two and two together, comes up with eighty-seven and rides off in a huff.

In a tense stand-off between JW and Rudd, Ben arrives just in time to shoot Rudd and to then get shot himself by Yak – love triangle solved which thankfully means I don’t get to eat the hat.

JW takes out Yak then tends to a dying Ben who asks him to tell Alice he “won’t be home for dinner”.

The film then rather callously cuts immediately to JW and Alice getting spliced, whilst poor old Ben’s corpse is still not yet cold in the ground. I guess them’s the breaks when you play second-fiddle to JW.

Not bad. Not brilliant either but watchable all the same.