Just like the previous film John Wayne starred in for Republic, “The Lonely Trail”, this one also takes its cue from the history of the Old West, in this case, the demise of the Pony Express, which ceased running in 1861.

JW plays ex-Pony Express rider John Blair who, along with his fellow out-of-work companion Larry Adams, played by Lane Chandler, decide to set up their own stage line business.

Off they ride to Buchanan City in order to procure themselves a stagecoach to tether to the four horses the two friends received in redundancy pay.

They approach the owner of the local stagecoach service, Cal Drake, played by Douglas Cosgrove, who persuades them instead to invest in one of his franchises, which runs to a place called Crescent City.

Knowing a bargain when they see one, the hapless partners sign a deal with Drake, hand over their payoff money and travel down to Crescent City, only to discover they’ve been sold a pup on account of the place being a ghost town.

Instead of riding straight back to Buchanan City and forcing the swindling hornswaggler to give them back their money at the point of a gun, they decide to stay on and make a go of it.

They meet the only two residents left in the town of Crescent City, Rocky O’Brien the mayor, played by Luke Kelly, and Doc Forsythe, played by Sam Flint. Rocky informs JW that a mail contract worth twenty-five-thousand dollars is up for grabs to run between Buchanan City and Sacramento, the contract being awarded to whoever drives the fastest stagecoach between the two towns.

The tone of the film is defined by the light-hearted background music that would be more at home on the soundtrack to a Laurel and Hardy comedy as opposed to a Western, leaving the audience in no doubt that it’s not exactly a film to be taken too seriously.

This comedic aspect is compounded when they find a skunk in the old stagecoach at Crescent City that Drake sold to them, everyone concerned running a mile to get away from it as quickly as possible.

Duke even gets to crack a joke, commenting when confronted by one of Drake’s bad guys on arriving back at Buchanan City that “I didn’t know school let out so early”. 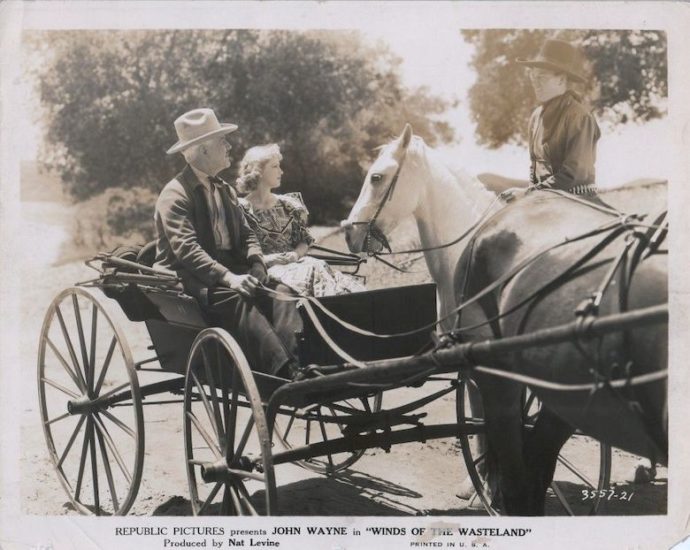 At this point, entering literally from stage right on a stagecoach, who should turn up but Doc Forsythe’s attractive daughter Barbara, played by Phyllis Fraser, who is suitably underwhelmed when she then hops on JWs stagecoach to see her father in Crescent City and catches sight of the abandoned town.

To make matters worse for villain Drake, JW chances upon a telegraph crew who have fallen ill after drinking poisoned water (maybe it was the same watering hole outlaw Gat Ganns drank from in “West of the Divide”).

After saving the life of the telegraph workers, the boss and his men offer to run the telegraph lines through Crescent City as opposed to Buchanan, which then puts JW at odds with Drake.

Seemingly falling for one of Drake’s schemes again, our boy agrees to deliver some gold bullion to Sacramento, Drake intending to have his men hold up the stage and shoot JW in the process.

JW plays along with the charade then outwits his potential killers, delivering the gold successfully then holding Drake to his promise to cancel the first installment of one-thousand dollars he had agreed to pay for the stage franchise to Crescent City.

The climax to the film is the much-anticipated stagecoach race to Sacramento, the only entries being JW versus Drake.

The villain pulls out all the stops in order to win but in the end, Duke gets the upper hand, the mail contract and of course the girl. The race itself is genuinely exciting, even though we all know JW is going to win.

Duke also gets to leap onto the horses at one point just like he does in “Stagecoach” a few years later, then gunning down a couple of Drakes cronies, including stuntman Yakima Canutt, who would double as an Apache chasing Wayne once again the later Ford classic.

A recommended and very good entry in Wayne’s early career at Republic.