I bet even John Wayne didn’t realise that the next film he was to make after this would be the one that finally put paid to his almost decade-long stint in the wilderness as a B-movie actor. Way to go Duke. 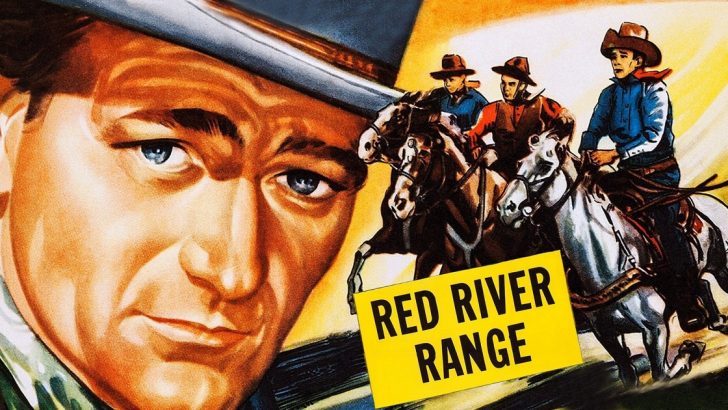 The Red River Cattlemen’s Association is gettin’ mighty riled up on account of their beef herds are, according to the ‘Mesquite Sentinel’, “disappearing without a trace”.

Not only are they disappearing, they’re actually being carted off by a gang of rustlers in a couple of sleek-looking trucks that definitely do not belong anywhere on the prairie in a cowboy movie worth its salt, so we must be back in Time Tunnel land again.

Also, I’ve seen enough of these JW 1930s Westerns by now to know within minutes that one of the members of the Association, Hartley, is the villain on account of his pencil thin moustache which is always a dead giveaway.

Someone comes up with the bright idea of asking the Governor to send help in order to apprehend the rustlers, Hartley of course volunteering to get the ball rolling so he can keep an eye on what the opposition is up to.

Cut to a montage of telegraph machines being clicked, telegraph poles transporting invisible messages of help and a hand retrieving a photograph from a drawer full of Civilian Volunteer Reserves available for undercover missions and what do you know?

The Three Mesquiteers get the job. 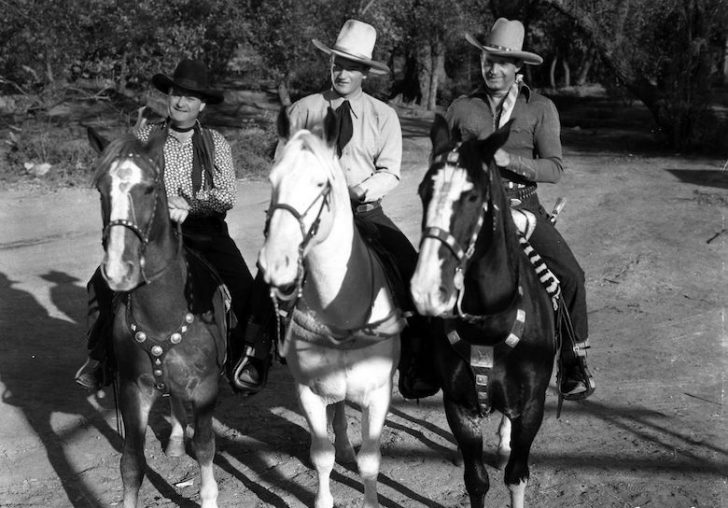 No mention that one of them moonlights as a ventriloquist with the weirdest looking dummy I’ve ever seen but I’m betting that’s going to come out in the wash sooner or later.

The Mesqs chance upon their old friend Tex Reilly, played by Kirby Grant, working undercover for the Retail Butchers Association and being chased by the rustlers who don’t want anyone associating themselves with an association of any kind.

Now listen closely because this next bit is a tad complicated.

After rescuing their friend it’s agreed that Stony will assume an alias as Killer Madigan whilst Tex becomes Stony Brooke in JWs stead.

JW then books into a Dude ranch that Tex was on his way to investigate and signs himself in under another alias, Jack Benson.

Upon escorting ‘Benson’ to his room the bellboy, played by black actor Fred ‘Snowflake’ Toones in a performance that’s so excruciatingly stereotypical of the time he makes Stepin Fetchit look like Sidney Poitier, discovers that JW is actually none other than Killer Madigan, a situation engineered by our boy who knows Fred is going to go straight to his boss, Payne, who’s also in cahoots with Hartley, and give the game away.

And so he does.

Knowing the Mesquiteers are chowing down with rancher Pop Mason and his daughter Jane, played by Lorna Gray, Hartley, who amazingly looks so much like the actor who plays Payne it’s getting a bit difficult to tell them apart, orders his henchman to “send over a couple of the boys and take care of them right away”.

In a very strange sequence, the boys turn up and ‘take care’ of the Mesquiteers by firing at the front of the cabin in the hope they might hit someone as opposed to just walking in and gunning everyone down instead.

When Tex ends up wounded he refuses to stay in bed, telling Tucson and Lullaby that “Jane, Pop and the kid will be in danger all the time”.

The kid? What kid?

Is Jane a single mother or something? How’s that going to go down with the Red River Law and Order League?

In the meantime, yet another of those annoying kids that occasionally turn up in these kinds of films, little Tommy Jones, played by Sammy McKim, appears complete with his own working six-shooter which seems to be de rigueur for small children in these later JW 1930s efforts.

His dad gets shot by rustlers, one of them actually trying to shoot Tommy in the back as he rides off for help, which is a bit of an overreaction, to say the least.

Whilst in pursuit of the killers of Tommy’s dad, Tucson and Lullaby come across some buried cowhides, realising that the reason the stolen herds are never found is because the rustlers slaughter the herd first then carry off the meat in the back of the trucks.

In the meantime Stony finds that the rustlers are being aided and abetted by the guests at the dude ranch, unwittingly taking part in what they think is an exercise in replicating the Old West.

Personally I find that hard to believe. No one is that dumb. Are they?

Little Tommy recovers remarkably well from the trauma of seeing his father shot to death and quickly accepts Jane’s offer that she and Pop adopt him so no therapy for this kid, although he may grow up to be a serial killer with abandonment issues in his late teens.

Witnessing Lullaby’s vent act with Elmer probably doesn’t do Tommy’s state of mind much of a favour either. It certainly didn’t mine.

Stony Brooke aka Jack Benson aka Killer Madigan finagles an in with the rustlers by promising to take care of Tucson and Lullaby which he does, ‘murdering’ both of them then riding off with the rustlers for their next big score by kidnapping a herd of cattle in Box Canyon.

Discovering from the ‘dead’ Mesquiteers that Killer is really Stony – am I going too fast for you? – Jane blabs who Stony really is in front of Hartley who then sets a trap for our hero.

Meanwhile, Little Tommy takes to his horse and rides around the countryside yelling at anyone who might listen that the rustlers are headed for Box Canyon. But hold your horses.

In yet another twist to what is turning out to be one of the most convoluted plots in a John Wayne film so far, the rustlers are headed for Mint Valley instead.

All parties concerned gather at the same spot, Hartley having been dispatched by Tucson who rather callously pushes the villain screaming to his death from a speeding truck. That’s what you get for mixing with the Mesqs.

The rustlers are rounded up after a fairly spectacular horse chase comprised of stock footage scenes from earlier Republic efforts, the good guys forcing them into the back of a truck just as the bad guys did with the cattle, only without the whole abattoir skinning thing.

Strangely enough Stony doesn’t get the girl this time, Jane taking up with and marrying Tex instead. You know, the guy who posed as Stony, got shot then disappeared from the rest of the film until the end.

Not that JW was all that concerned.

Approximately four days after finishing “Red River Range” he found himself on location for his role as the Ringo Kid in “Stagecoach”.

The rest as they say is history.