The next review should have been for “The Oregon Trail” but it seems to have gone missing somewhere along the way which is a shame as it may have turned out to be one of the best of all the Poverty Row Westerns John Wayne made in the 1930s. We’ll never know, so in the meantime help yourself to “The Lawless Nineties” instead. 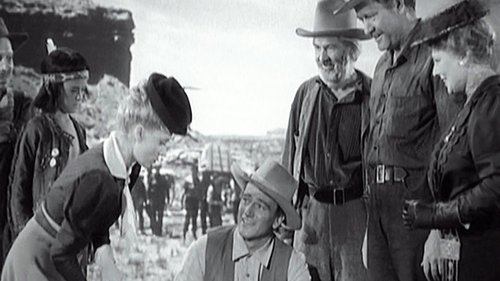 Directed by Joseph Kane, who went on to work on the two Republic films that followed this one, plus “Flame of Barbary Coast” in 1945, “The Lawless Nineties” finds JW cast in yet another of those undercover roles he played so frequently during this period in his career.

In this one, he’s government agent John Tipton, tasked with taking on a gang of baddies who are determined to ensure Wyoming doesn’t become part of the Union.

Duke and his pardner Bridger, played by Lane Chandler, mosey on down to Crocket City in order to make sure that the voting isn’t rigged in favour of the outlaws who are scaring folk off their land. Chandler is listed ninth in the cast list so something tells us he’s not going to make it to the final reel.

You have to wonder sometimes how clueless the townsfolk depicted in films such as this really are, seeing as it’s so obvious that the man heading up the committee for law and order, Charles K. Plummer, played by Harry Woods, is also the galoot responsible for trying to make sure the vote fails in order to keep all the land for himself.

How the innocent citizens of Crocket City are unable to work this out is totally beyond us seeing as Plummer swaggeringly puffs away on his cigar whilst sporting a very thin moustache, two huge giveaways that signify there’s a major villain in the room.

Not only that but Plummer doesn’t applaud newcomer Major Carter, played by an almost unrecognizable “Gabby” Hayes when he promises that his newspaper, “The City Blade”, will fight all those who oppose the forthcoming election for statehood. If that’s not a big clue as to where Plummer’s loyalties lay we don’t know what is.

Black actor Fred Toones plays a character called Moses and is billed in the cast as Snowflake. We’re not sure if that might have been Toones stage name or someone’s idea of a joke, but either way, don’t tell the current day snowflakes otherwise they’ll be all over this one like a rash.

Toones is full of “Yassuh’s, no sahs” and the like in the style of Stepin Fetchit, another reason as to why this film is not shown on TV that often.

Sure enough, poor old Bridger done gets plugged in the back after the outlaws discover he’s a government man. JW has to deny he knows who his dead partner is which makes for quite a poignant moment in the film, Wayne’s reaction illustrates how his acting skills have improved quite significantly since his career began.

Making good on his promise to “flush out the rats” that killed his pal, JW comes up against an outlaw by the name of Davis, played by Cliff Lyons, who was to serve as assistant director on JWs production of “The Alamo” twenty-five years later. Duke still punches him in the face though.

The Major stirs up a hornet’s nest by putting out posters goading the “outlaws and crooked politicians”, the varmints making their displeasure clear by shooting him in the back three times.

Upon his death the film then cuts to Moses and Maisie Lou duetting on “Walk Over God’s Heaven”, introducing a little spirituality into the proceedings.

The Major’s feisty daughter Janet, played by Ann Rutherford, promises to continue running the paper, JW remarking “but that’s no job for you” like the enlightened woke cowboy he so obviously is.

Upon hearing that JW and his government agents intend to upset the applecart at the local polling stations by arresting anyone who stops the local citizens voting, Plummer and his gang decide to lock the voters up in their houses until polling finishes at the end of the day.

Makes a change from killing everyone, but it seems a rather laboured tactic in order to rig an election.

Despite their nefarious efforts, news comes through at the end that somehow or other enough voters got through to ensure Wyoming gains statehood.

JW and the boys reign supreme whilst Plummer and what’s left of the boys end up in the state calaboose, and everyone lives happily ever after.

This is not a bad film overall, with a decent storyline and enough action to engage cowboy and John Wayne fans of all ages. It just goes to show what Republic could do with a half-decent script and a good director.