This is the second part of John Wayne’s “unrealised” films. The first installment considers the movies JW passed on for one reason or another. Check out The Movies John Wayne Turned Down.

Recently perusing an old movie magazine that was published way back in 1969 I came across an article on the films of John Wayne which happened to mention that after appearing in “The Undefeated” the actor had a “further project in active preparation [entitled] ‘Overlord of Hope’”.

No? Me neither. Never heard of it and I can’t find any reference to this movie that JW never appeared in anywhere.

This got me thinking about all of the films JW didn’t get to make or just plain missed out on for one reason or the other so here’s a few more to add to the list from the previous article.

As before the titles are listed according to personal preference. 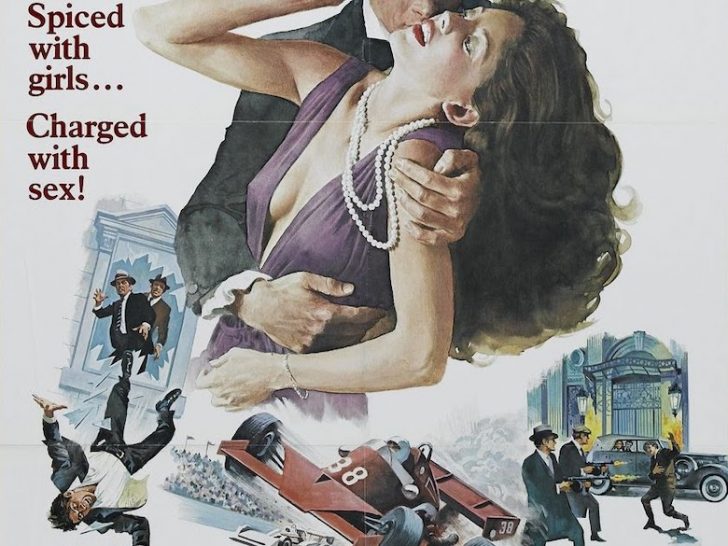 One can only thank the gods that the JW faithful never got to see their hero onscreen uttering the words “never sh*t a sh*tt*r” which gives you some idea of the tone of the film, which was based upon the Harold Robbins novel of the same name.

The main character, as would have been played by Wayne, was a thinly-disguised portrait of car magnate Henry Ford in all his rough mouthed, lady killing arrogant best.

Thankfully Duke lost out to that most revered of all British thespians, Laurence Olivier, who obviously had no qualms when it came to dropping his trousers for the camera prior to indulging in a five-minute relationship on the nearest bed with his housemaid. 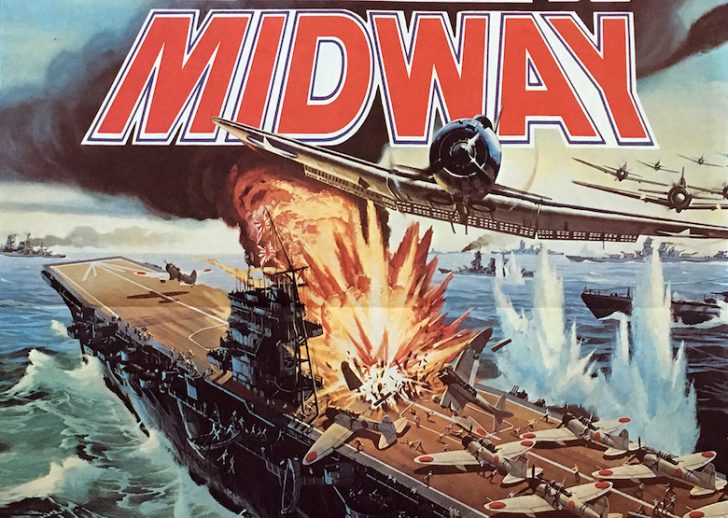 According to various sources, Wayne was supposedly in the running to play Admiral William “Bull” Halsey in the all-star WWII epic “Midway”.

The famous admiral had already been portrayed by James Cagney in “The Gallant Hours” in 1960 and I think I’m fairly sure I read somewhere once that Wayne was up for taking on the role but then passed on it.

Maybe because he’d just finished “The Shootist” and was still suffering the effects of the flu that he caught whilst filming what turned out to be his last movie.

Either way JW didn’t take on the role of Halsey, the part eventually going to Robert Mitchum instead. 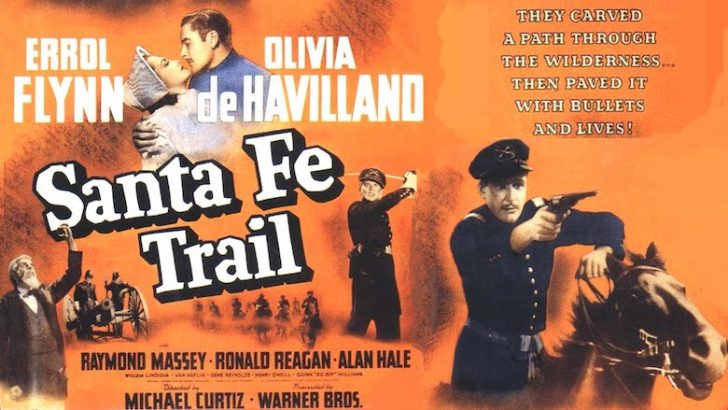 “Together on the big screen for the first time! Errol Flynn and John Wayne!”

But it was not to be. According to biographer Scott Eyman, “Warner Bros. pursued Wayne to play George Custer” but by 1940, Duke was bathing in the stardom that came his way after “Stagecoach”.

He apparently balked at playing a secondary role to Flynn, although that didn’t stop JW doing that exact thing opposite Claire Trevor for a couple of films or more.

The role went to Ronald Reagan instead who, according to Eyman “spent the rest of his life complaining about how playing second lead to Errol Flynn was a recipe for professional oblivion”, so maybe JW got it right on this one. 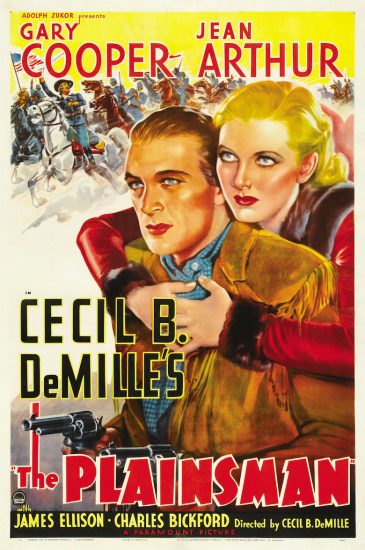 This DeMille film and the following title, “North West Mounted Police”, another DeMille effort, are linked as regards Wayne’s non-participation, as will be explained.

Stuck in Poverty Row hell after the box-office failure of “The Big Trail”, Duke and his agent at the time expressed interest in him playing the role of Wild Bill Hickok in “The Plainsman”.

In a meeting with DeMille the director, according to Scott Eyman, told Wayne “I saw it [“The Big Trail”] and you did just fine. But a lot of water has gone under the bridge since then”.

DeMille then went on to cast Gary Cooper in the role of Hickock instead. Flash forward a few years later to…. 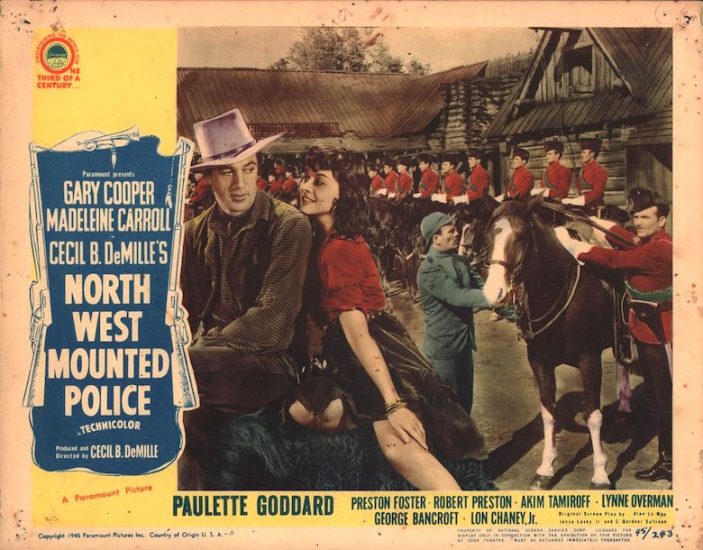 … and by this time Duke’s stardom is now in its ascendancy so DeMille sent JW the script to his new Mountie film for consideration.

JW decided he didn’t want the part on offer, which eventually went to Preston Foster, and sent the script back with a note saying “A lot of water’s gone under the bridge”.

This clearly did not interfere with their professional relationship, both director and star eventually working together on “Reap the Wild Wind” in 1942. 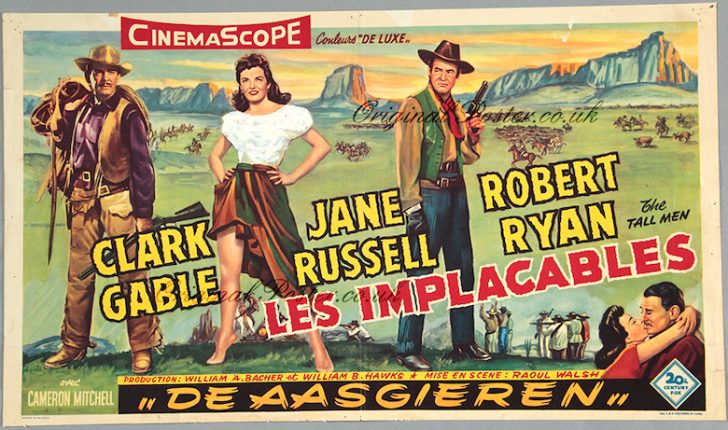 Here was an opportunity for Wayne to play with a screen star of equal standing, this time Clark Gable, in a big-budget 20th Century Fox production, and what happens?

According to author Fred Landesman it seems neither JW nor Gable could agree on who was to get top billing so Duke hitched up his wagon and moved on, gifting the role he was slated to play to Robert Ryan.

The film, budgeted at a whopping $3 million dollars and directed by Raoul Walsh, who also helmed “The Big Trail”, would have seen the pair fighting each other over sultry screen siren Jane Russell.

Maybe Wayne didn’t want to be seen being given the elbow in preference to Gable. 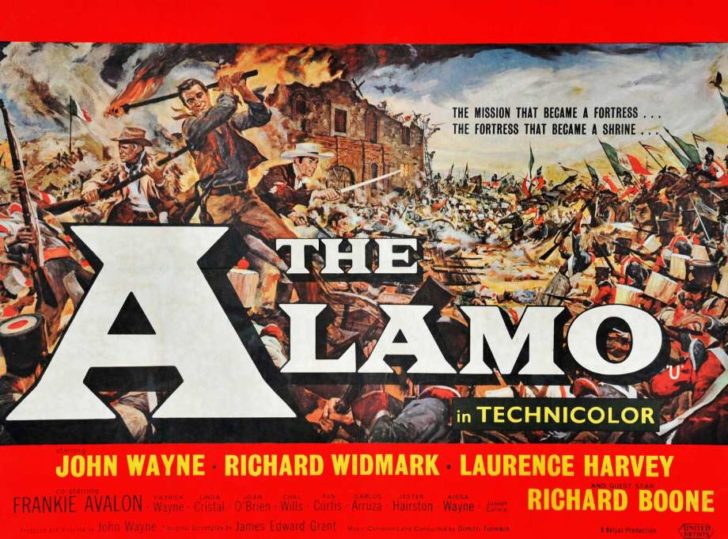 This is a bit of a cheat if I’m honest because, seeing as Duke both produced and directed the film he had the power to play any role he wanted to, initially plumping for the part of Sam Houston, a cameo appearance that would have given him time to concentrate solely on his main role as director.

Unfortunately, United Artists never got to read that memo and decided that if JW wanted them to help finance his pet project then he would have to take on the starring role of Davy Crockett instead.

The part of Houston went to Richard Boone who walked away with a brand new Rolls Royce in payment courtesy of Duke. 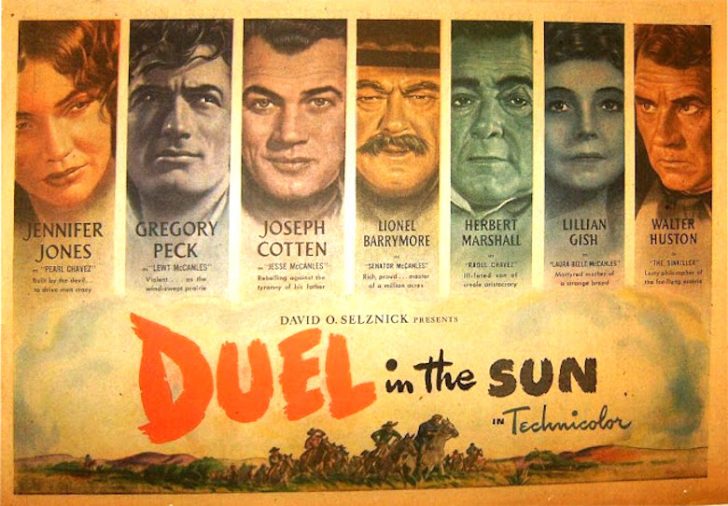 Various sources, including the American “TV Guide” assert that the two main roles in what the magazine called “ An enormous, lumbering horse opera, done up like an oversexed prize-winning bronco”, were originally offered to Wayne and Hedy Lamarr.

Due to being inconveniently pregnant Lamarr lost out on the role of the sensual half-Native American temptress Pearl Chavez to Jennifer Jones, who at that time was being heavily romanced by the producer of the film, David “Gone With the Wind” O Selznick.

Depending on who you believe either Wayne passed on the project after reading “the dubious script” which apparently “made him squeamish” or he was “forced to commit elsewhere [when] production delays continued”.

The role of bad boy Lewt McCanies was eventually given to Gregory Peck who must have been somewhat chagrined when critics rechristened the film “Lust in the Dust”. Probably another lucky break for Mr. Wayne in hindsight. 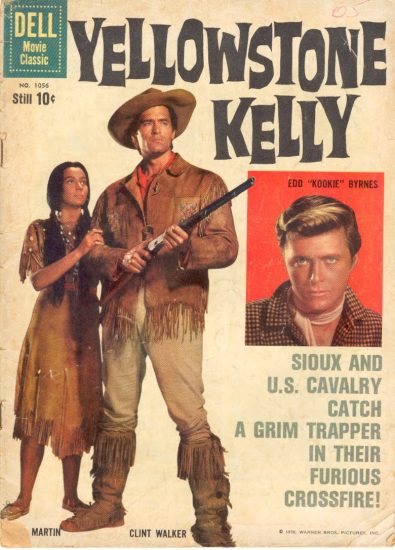 The role of the title character was originally supposed to be played by John Wayne, with John Ford directing from a Burt Kennedy script.

For reasons never really specified, although I suspect money was the prime motivator, actor and director opted to make “The Horse Soldiers” instead.

I think both Wayne and Ford made a big mistake on this one, seeing as how “The Horse Soldiers” didn’t do that well at the box office.

Also, the role of fur trapper and scout Kelly was custom made for Wayne, and the positive reaction that the film has garnered over the years from both critics and audiences alike suggests that with JW in the title role, it could have been just as successful, if not more so, than “Hondo”, a role somewhat similar in style to that of the part Wayne bequeathed to Clint Walker.

At the time, Walker was in the middle of a successful six-year stint as TV cowboy “Cheyenne”, the film capitalising on his small screen fame as well as that of co-star and teen sensation Edd Byrnes, famous for his role as Kookie in “77 Sunset Strip”.

Make no mistake. “Yellowstone Kelly” is a very good and highly underrated Western. Just think how much better it would have been with both Wayne and Ford involved. C’est la vie as they say in certain circles. 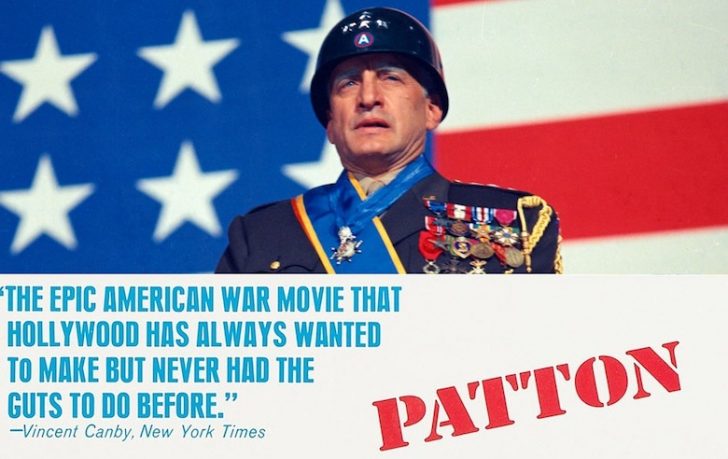 IMDB states that “John Wayne eagerly sought the role of Gen. George S. Patton but was turned down by producer Frank McCarthy”.

JW biographer Scott Eyman maintains, however, that Wayne “turned down Patton, although since he was a huge admirer of George C. Scott’s performance he had no regrets”.

Scott, who won an Oscar for playing the famed WWII general, is definitely at his best in this film but since becoming aware that Wayne might have been up for the role it’s hard to imagine anyone else in the part.

The famous opening speech where Patton makes his feelings known to his men on the subject of Hitler, the Nazis, cowardice, heroism and war, in general, is absolutely tailor-made for Duke.

I can just hear him right now addressing his audience in that familiar voice of his that constantly threatened and intimidated at one and the same time to “remember that no b*st*rd ever won a war by dying for his country.

He won it by making the other poor dumb b*st*rd die for his country… We’re going to murder those lousy Hun b*st*rds by the bushel…I don’t want to get any messages saying we’re holding our position.

We’re not holding anything. We’re going to go through them like cr*p through a goose… Alright, you sons of bitches. Now you know how I feel”

In another memorable scene Patton runs out into the path of a Nazi plane strafing his soldiers and actually tries to shoot it down with his handgun.

No wonder JW may have “eagerly sought the role”.

It has John Wayne written all over it and maybe somewhere out there in a parallel universe he would have played Patton instead of George C. Scott. I doubt he would have refused the Oscar like Scott did though. That would have been just plain dumb.