The stand out movie The Quiet Man, starring John Wayne and Maureen O’Hara was shot in and around the village of Cong in County Mayo so, making a mental note of the name of the place, I decided that if I was ever in the area I’d take a look at some of the locations used for the film. 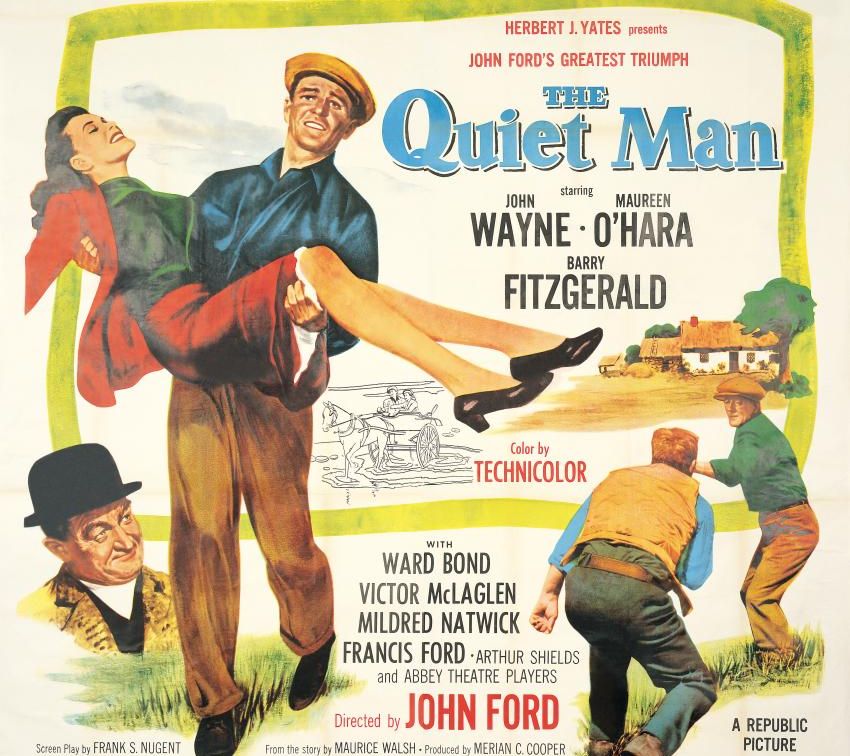 Back in the early 90s I was reading a book by the now-deceased British film director Lindsay Anderson (he directed If, O Lucky Man and Britannia Hospital among others) when I came across the mention of a meeting Anderson had with John Ford in Dublin, in 1951, while Ford was in Ireland shooting location footage for The Quiet Man.

A penny suddenly dropped. Of course, Ford must have gone to Ireland to make one of his most famous films, something that had not occurred to me before.

Typically, Hollywood films were very rarely made on location but by the late 1940s / early 1950s television had drastically reduced the American domestic cinema audience, forcing Hollywood to tempt film-goers back with innovations such as 3D and Cinemascope, as well as the added attraction of location shooting to bring an extra dimension to the cinematic experience.

A few years later, 1993 to be exact, we decided to take a family holiday in Ireland and in the second week of our visit we stayed in a boarding house in the village of Spiddal, located on the shore of Galway Bay.

One day the sun decided to grant us with it’s presence so, checking my road map, I plotted a route which took us north of Spiddal into Connemara, after which we hung a right to take us to the village of Cong. We entered the village from the West, driving up the main high street until we hit a T junction, on the right of which I was delighted to see Pat Cohan’s Bar, the pub in which John Wayne threw the final punch that finished his epic fist fight with Victor McLaglen (although the interior was built on a Hollywood set). 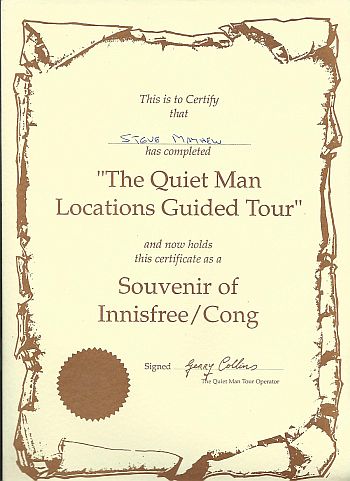 After we parked I immediately enlisted in The Quiet Man tour, for which I still proudly hold a certificate.

Our guide was a young man who couldn’t have been more than about 17 years old but who had obviously seen the John Ford classic more times than he’d had birthdays. The tour took about an hour in which we saw Mary Kate Danaher’s house, to which John Wayne’s character, Sean Thornton, arrived for his first date with her.

We were shown the gate that Ward Bond, playing the local Catholic priest, Father Lonergan, leaps over in excitement upon being informed that the climactic fist fight has finally begun, as well as the location where Wayne knocks McLaglen into a stream with one punch. Various other locations were also visited, including the magnificent Ashford Castle, which is literally about half a mile outside of the village. 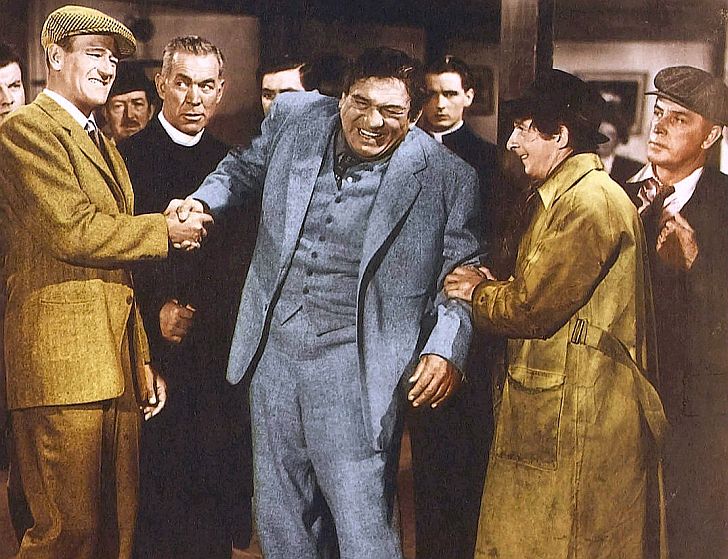 Once the tour had finished I revisited some of the locations on my own and was struck by how little everything had changed since John Ford and his cast and crew had arrived to shoot The Quiet Man over forty years before.

At some point either on that day we visited Cong, or shortly after, I started to think about what it might have been like for a young boy living in the village in 1951 when the film was being made.

What if that kid was, just like me when I was younger, a huge John Wayne fan?

Furthermore, what if one day he opened his front door to see the real John Wayne standing in the street outside his house preparing for a take? What would that young boy be thinking? How would he react upon meeting his hero in the flesh?

And that, dear reader, is how I came to write Connemara Days

. Actually, I wrote the screenplay first, a script which unfortunately has yet to be produced. The book version followed a few years afterwards. I couldn’t find a publisher so I self-published a thousand paperback copies, most of which I managed to sell in Ireland and to various interested parties.

If you want to contact me personally with your thoughts on the book – the good and the not-so-good – you can email me at [email protected]. You can also post a review on Amazon as well if you are so inclined. If the feedback is positive enough I will move towards writing my next book, which is also a John Wayne themed story.

You may be interested in knowing that I called the book Connemara Days because on the day we visited Cong for the first time back in 1993 we drove east through Connemara and I did not realise until quite a while afterwards that Cong is actually in County Mayo, albeit only just over the border.

I contemplated changing the title to County Mayo Days but that kind of rhymed with mayonnaise which in itself suggested the existence of some strange kind of Irish relish so I kept the original title.

I hope you enjoy it – the book that is, not the relish.