I thought I’d share some background information and a behind the scenes look at the making of The Quiet Man, bearing in mind the number of people I have met and spoken to over the years who were actually involved in the film itself. 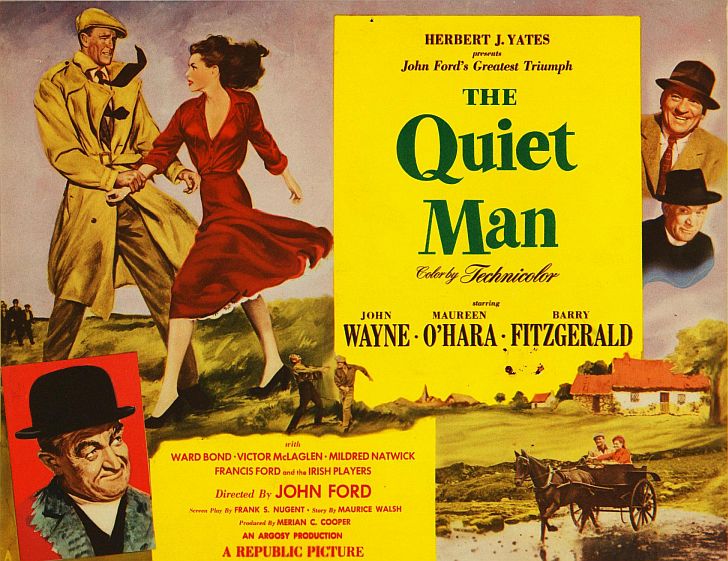 A few minutes into the film we see Barry Fitzgerald and John Wayne travelling towards the fictional village of Innisfree. At one point Fitzgerald stops their horse and cart on the crest of a humpbacked stone bridge which spans a small river.

Leam bridge as it is known is still preserved by Galway County Council and can be found just off of the Galway- Clifden N59 road about five miles past the village of Oughterard. The location is suitably sign-posted for all Wayne / Ford / Quiet Man fans. I stopped off of there way back in 1993 with my family on the way to Cong, where a lot of the locations were shot for Ford’s film. 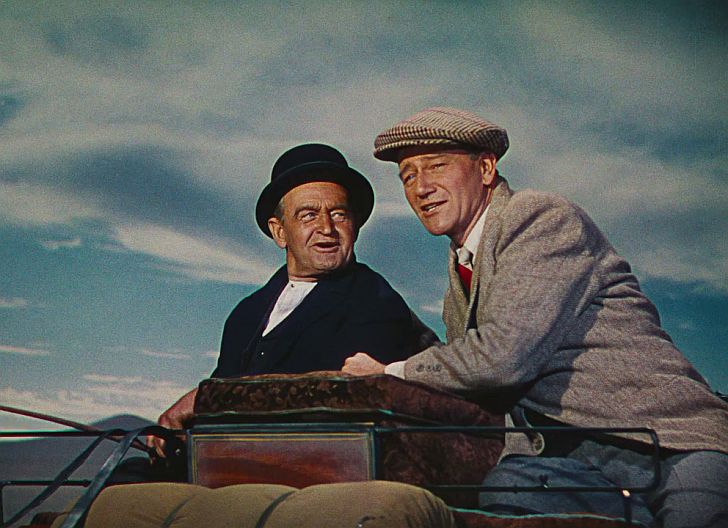 Parking the car on the other side of the main road I walked onto the bridge to take in the breath-taking scenery on either side of the stone structure. After a few moments, I detected the sound of voices a few feet below me on the bank of the stream. Gazing down from the bridge I was treated to the unforgettable sight of two French female backpackers shaving their armpits in the water. Kind of took the magic away for a moment if I’m totally honest.

During the sequence on the bridge, Wayne looks across to the small cottage, White O’Morn, in which he was born. The actual cottage was nowhere near Leam bridge but was located at a place called Teernakill about 15 miles West of Cong.

Unfortunately, the cottage is no longer standing with only a pile of rubble to indicate the foundations of this now iconic location from The Quiet Man.

There’s a Facebook Quiet Man Cottage page dedicated to the restoration of White O’Morn which was officially designated a heritage site back in 2015. Apparently, this has still not galvanised the Irish Tourist Board to put money towards the renovation of the building.

There are many people calling for the cottage to be restored to its original Quiet Man state, a number of individuals pointing out that it would make a great tourist attraction for the area. In the meantime, if you want to know what the cottage looked like in its former glory – you’ve always got the film.

Pat Cohan’s Bar features quite heavily in the film, both as a meeting place for the various characters in the village of Innisfree, and as the endpoint for the final punch, Wayne throws at Victor McLaglen to settle their epic fistfight. It’s a well-known fact that the exterior of the building in Cong wasn’t actually a pub, John Ford’s crew painting the outside façade of what was originally a shop to look like a pub.

The continuing popularity of The Quiet Man means that you can now actually walk into the door of Pat Cohan’s Bar and order a drink as it was refurbished a few years ago, initially just as a pub but now also serving as a gastro-pub restaurant as well. 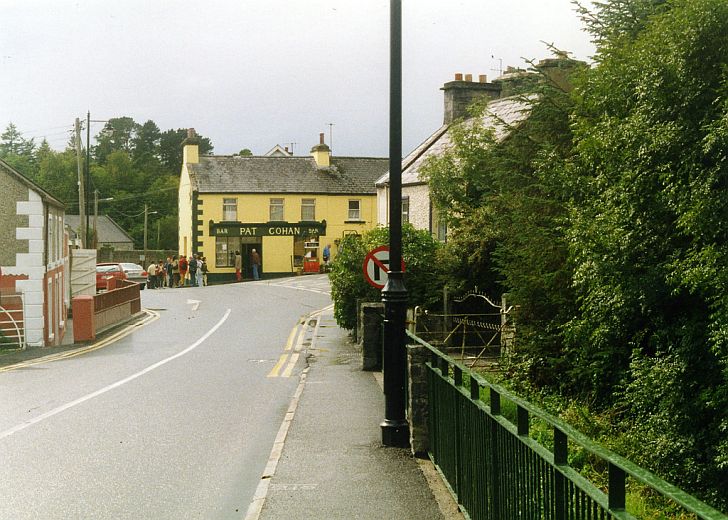 When I visited Cong back in the late 1990s I was accompanied by a couple of film producers interested in turning a screenplay I wrote about a family living in Cong when The Quiet Man was being filmed into a movie that has still yet to get off the ground.

The village of Cong is quite small and before we knew it word had quickly spread that there was a group of ‘film men’ in the vicinity. I lost count that day of the number of people in Cong who offered to provide the catering should my movie ever get made. Whilst eating in a restaurant on our last night in the village I was momentarily mistaken for Steven Spielberg because of my grey hair, glasses and – how can I delicately put this – the classically sculptured Jewish nose that I have sported since birth.

Luckily everyone in the establishment eventually realised I wasn’t who they thought I was, otherwise I think I would have ended up with the bill for the whole restaurant.

Believe it or not, there was no electricity available in Cong at the time Ford and his cast and crew rolled up into the village. The Electricity Supply Board was busy placing the required telegraph poles in the surrounding vicinity whilst the film was being made and the occasional sound of dynamite exploding to create a firm foundation for the poles made its way onto the soundtrack.

A compromise was reached in which the electrification of Cong was postponed as Ford required the village to represent Ireland as it was in the 1920s, without electricity poles everywhere. Electricity finally came to the village on July 6th, 1951, in which John Wayne oversaw a ceremony in which the last paraffin lamp was turned off and replaced by the new source of energy from the ESB. It should come as no surprise that this ceremony was held in a pub.

On one of my occasional visits to Cong I was introduced to a sprightly gentleman in his early 80s by the name of Tom Ryan. It turned out that Tom was appointed as John Ford’s personal chauffeur back in 1951 by dint of the fact that Tom had a car. Tom told me that on occasion he was also required to transport both John Wayne and Maureen O’Hara to and from some of the locations as part of his job.

Previous to my meeting with Tom I had been asked to tone down a couple of sections of my screenplay in which I referred to John Wayne’s propensity for the occasional drink or two. Seeing as Tom was actually there during the shooting of The Quiet Man in Cong I asked him for this thoughts on this.

Looking over both shoulders to make sure no one could hear him Tom confessed to me that Wayne would on occasion take a nip from a bottle of whisky that he secreted under the passenger seat of Tom’s car. He then added that ‘John Wayne would never drink in the car if Maureen O’Hara was also in the vehicle art the same time. He was a real gentleman like that’.

During one of the many excursions John Wayne took into Cong to sample the local brew on offer, he took part in a drinking bout with one of the extras in the film, an extra who also happened to be a professional boxer by the name of ‘Marching’ Mairtin Thornton. Apparently, they both ended up in the bar of Ryan’s Hotel whereupon an argument broke out between Wayne and his boxer friend.

Duke was heard to threaten Thornton – a moment here to take in the coincidental fact that the surname of Wayne’s character in The Quiet Man is also called Thornton – that only one of them would survive should they have a fight. Before their drinking bout could turn into a boxing bout Ward Bond arrived with backup and hustled Wayne back to his hotel.

This was probably a good thing for Wayne, who according to witnesses was ever so slightly more inebriated than Mr Marching, as he would have quite possibly suffered serious injury from the fists his pugilistic drinking friend.

Victor McLaglen’s son, Andrew, recounted to me – and I’ve also read this elsewhere from other sources – that John Ford rode his father quite mercilessly when filming the wedding sequence in which Victor, as Red Will Danaher, sweeps a pile of money off of the table in front of him.

His character finds out that he has been tricked into letting his sister, Mary Kate, marry Sean Thornton after being told that there is an implicit understanding that the Widow Tillane will offer her hand in marriage to Danaher, which turns out not to be the case.

Apparently, Ford goaded McLaglen by ordering numerous takes of the actor angrily clearing the table of money. According to Andrew McLaglen, his father displays real fury in that scene, and is actually ‘in the moment’, as actors might say today. A case of Ford getting his cast to indulge in a little ‘method’ acting when required.

There is actually one other ‘method’ moment in the film, and it takes place right at the end when Maureen O’Hara whispers somewhat suggestively into Wayne’s ear. 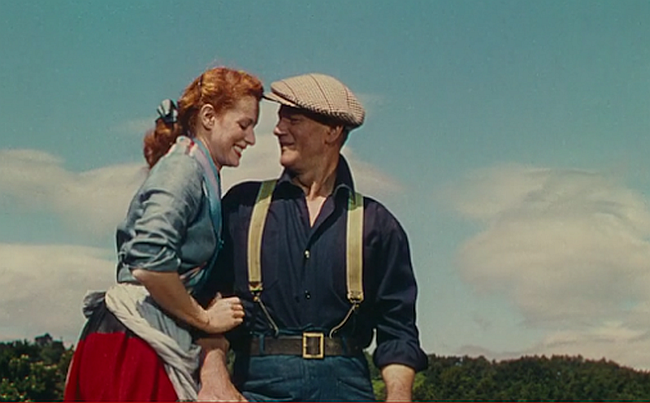 The reaction from Wayne indicates he is caught by surprise at whatever it was she said to him, and now with the demise of Maureen O’Hara the secret of what passed between them will stay a mystery. Apparently, the line she whispered was an unscripted piece of dialogue devised by Ford to provoke an unexpected reaction from Wayne, which it obviously did.

There has been a lot of conjecture over the years as to exactly what that line of dialogue was, and there are numerous websites devoted to unravelling the mystery. One site suggests Miss O’Hara is inviting him to have sex with her, which I guess kind of goes without question really.

One of the many books on the making of the film muses on the possibility that the actress is whispering an Irish romantic suggestion such as ‘how would you like to go halves on a baby with me?’ in his ear. All I know is, if The Quiet Man were remade for today’s audience, you would be left in no doubt as to what was said. There’s an element of tantalising mystery at the end that will always leave the audience guessing, and that’s why the film endures to this day.

Some of what you’ve read here is from my own personal recollections of visiting the village of Cong in County Mayo. I have also incorporated information from two superlative books on The Quiet man, In the Footsteps of the Quiet Man

by Gerry McNee and The Complete Guide to The Quiet Man)

by Des MacHale, both of which are still available for purchase on Amazon.

32 thoughts on “The Quiet Man – Behind the Scenes”

This website uses cookies to improve your experience while you navigate through the website. Out of these, the cookies that are categorized as necessary are stored on your browser as they are essential for the working of basic functionalities of the website. We also use third-party cookies that help us analyze and understand how you use this website. These cookies will be stored in your browser only with your consent. You also have the option to opt-out of these cookies. But opting out of some of these cookies may affect your browsing experience.
Necessary Always Enabled
Necessary cookies are absolutely essential for the website to function properly. This category only includes cookies that ensures basic functionalities and security features of the website. These cookies do not store any personal information.
Non-necessary
Any cookies that may not be particularly necessary for the website to function and is used specifically to collect user personal data via analytics, ads, other embedded contents are termed as non-necessary cookies. It is mandatory to procure user consent prior to running these cookies on your website.
SAVE & ACCEPT
<script id="generate-a1