There’s a surprisingly interesting premise at work in this film. A boxer by the name of Gus “Knockout” Corrigan, played by Ward Bond, travels from town to town challenging any local to a fight.

Turning up in a community in the Northwest he finds himself face-to-face with Farmer Jones, played by John Wayne. 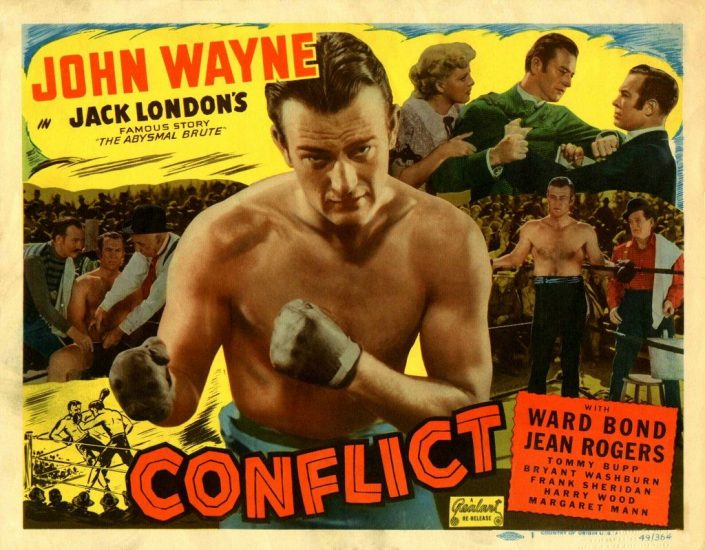 The townsfolk put all their money on Jones only to watch as Corrigan knocks him out. The surprise is that it’s a well-planned scam. Farmer Jones is actually a retired lumberjack by the name of Pat Glendon and he’s spent a couple of months ingratiating himself with everyone so that by the time Corrigan turns up they bet all their money on their new friend who then takes a dive.

JW a bad’un from the get-go. How about that?

Seeing as he still has some semblance of a conscience Glendon insists on giving as good as he gets in the ring with Corrigan until it’s time to quit, which doesn’t go down too well (pun intended) with the boss and brains of the outfit Sam Stubener, played by Frank Sheridan.

He sends Glendon on to the next town, which by a huge coincidence turns out to be a logging community, ordering another member of the gang who has no brains at all, Spider, played by Eddie Bordern, to accompany JW and make nice with the locals.

Firmly ensconced in Cedar City, Glendon ignores Spider’s pleas to not get “mixed up with any goil” and starts making eyes at purty social worker Maude, played by Jean Rogers, fresh from her role as the original Dale Arden in the first “Flash Gordon” serial.

Unknown to the two newcomers Maude is a reporter working undercover to expose Stubener’s corrupt boxing contest organisation. JW attempts to impress Maude by reading out loud the classic Shakespeare line “a horse, a horse, a kingdom for my horse” without recourse to iambic pentameter, but it’s a good try anyhow.

Maude is suitably charmed enough to let him carry her books. 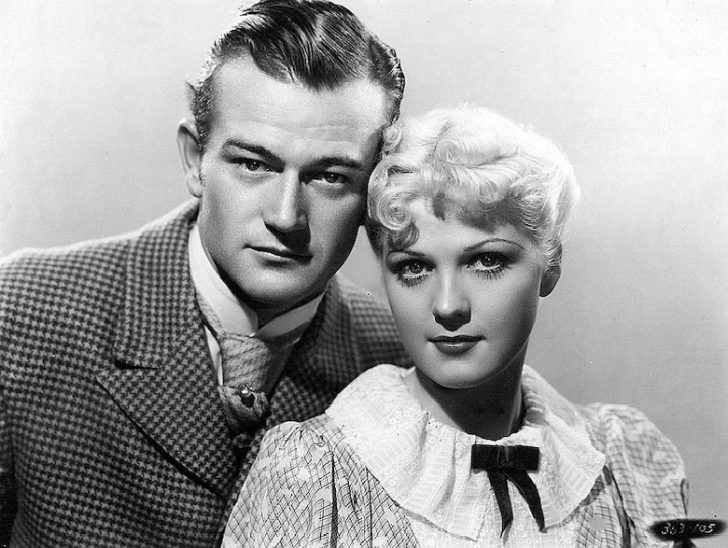 Maude is even more impressed when JW dives into a raging river, although not so raging when he’s shown in closeup, to rescue poor little orphan Tommy, played by Tommy Bupp.

It turns out the kid’s as crooked as JW, shooting craps like a seasoned felon with a couple of loaded dice. Upon being presented with the sight of JWs toned muscles the kid suggests that maybe Glendon ought to take on the boxer he’s heard is going to be visiting Cedar City soon.

Poor gullible Tommy even goes so far as to help Glendon prepare for his fixed bout with Corrigan by becoming his manager, thus positioning him up for a big let-down once he finds out his new friend isn’t on the level.

It seems there’s a feud going on between two rival logging gangs which comes to a head at the local Cedar City picnic. Glendon ends up beating on “Ruffhouse” Kelly, played by Harry Woods, who was going to be put forward as a candidate to take on “Knockout” Corrigan when he arrives.

The rubes end up suggesting that Glendon should try and take Corrigan down instead, setting up yet another bunch of suckers to be taken to the cleaners.

Glendon’s good streak comes to the surface when he decides on the spur of the moment to adopt Tommy, which he can apparently do just by talking to the local judge. Different times, dear reader, different times.

Meanwhile, Maude has got the hots for JW, telling her editor there’s no way he’s in on the boxing scam even though he has been instrumental in taking “Ruffhouse” Kelly out of the picture.

It’s only once the locals start betting on Glendon that he finally starts to realise what a heel he is. Even no brains Spider gets an attack of conscience and starts to feel bad about scamming a little old lady who makes “gorgeous apple pies”.

Glendon pays Stubener a visit and tells him to call off the match. If he doesn’t then Glendon is going to fight Corrigan for real so Stubener “wises” him up and informs him that Maude, though how he knows this isn’t actually explained, is an undercover newspaper reporter and is thus as duplicitous as Glendon.

In quick succession a) Tommy overhears his fellow orphans suggest that his dad is a fake and b) tells Maude who confronts Glendon who c) suggests to Tommy they clear out of Cedar City but d) changes his mind when Tommy tearfully tells him he doesn’t believe he’s a fake so d) Glendon decides to take on Corrigan for real whilst e) Corrigan tries to rig the fight by concreting the inside of his gloves which f) Spider sees and tries to warn Glendon before getting shot by a member of his own gang but then insists on not going to hospital as he wants to watch as g) Glendon punches Corrigan’s lights out.

There’s a few loose ends left floating in the air by the time Glendon is hailed as a hero, such as the fact that his previous participation in the other rigged boxing matches would surely come to light once the law gets involved but apart from that, this is quite an entertaining film with a good script based on a story by novelist Jack London entitled “The Abysmal Brute” and an impressively good cast as well.

Wayne is much more animated in the second of the Universal films he made in the mid-thirties, more so than in the low-budget Republic Westerns he made before and after this period in his career. Maybe the change of pace and a more interesting storyline helped put a bit of a sparkle in his own performance.