By my reckoning 1933 was one of the most prolific in John Wayne’s career with twelve of his films being released, Sagebrush Trail the fifth and last Western he starred in for that year.

I actually started watching a colourised version of this film, which also appeared to have a brand new soundtrack over the credits, but it just didn’t feel right to me. There’s something quite atmospheric about these early Wayne Westerns when you watch them in black and white and with the original soundtrack that kind of gets lost in the mix once the films are refurbished, so I’m going to stick to the original versions, wherever I can find them. 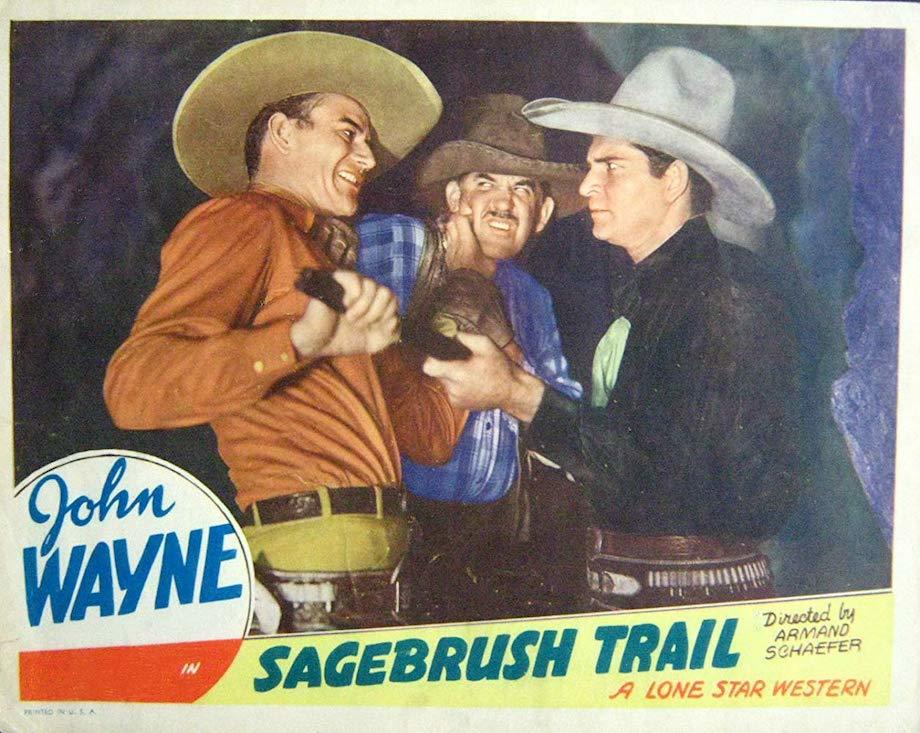 Sagebrush Trail is another of those Westerns set in modern times, with cars and automated printing presses to indicate we’re in the 20th Century, a world that then totally disappears from the rest of the film after the beginning.

JW, as John Brant, is an escaped innocent prisoner jailed for murder who goes on the run before falling in with Joseph Conlon, played by Lane Chandler, who introduces him to his gang of fellow outlaws.

Seeing as Brant is plainly a man of action and ready to rough and tumble with the rest of them, the gang decide that the only obvious course to take is to appoint the new man as their resident cook. I know. I didn’t see that one coming either.

Prior to this, JW eludes a two-man posse by hiding underwater and using a hollow reed to breathe through. So, if anyone ever asks you what John Wayne and James Bond have in common, there’s your answer (if you haven’t seen Dr. No then you’re not going to have any idea what I’m talking about). 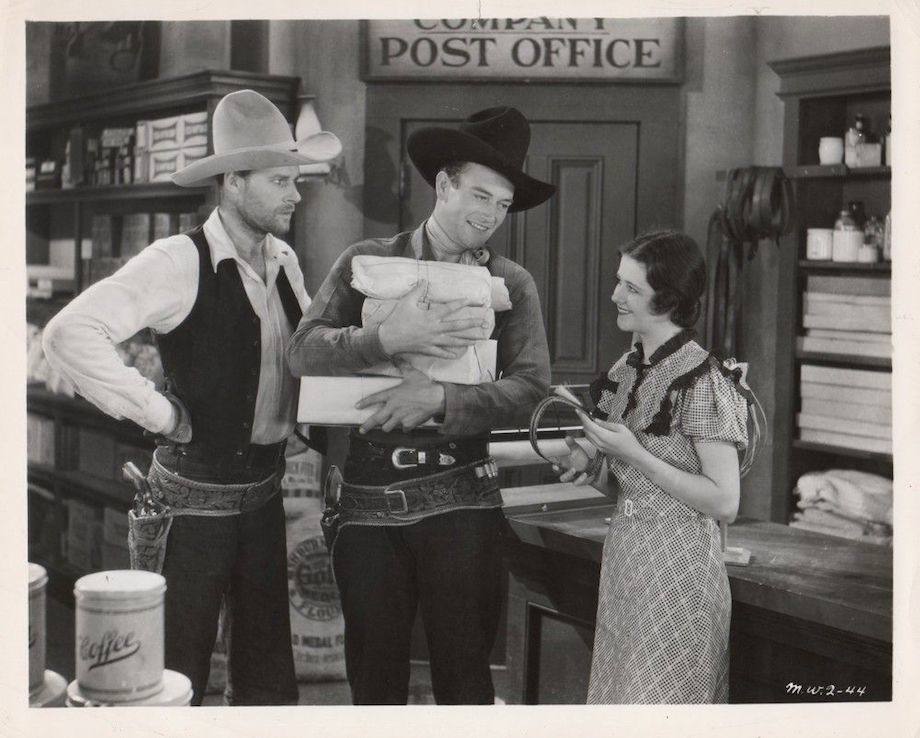 What with him now being a cook and all, JW and his new friend go into town to ostensibly buy some groceries, although the real reason is so that Conlon can case the joint for a proposed robbery

Wayne asks Shirley, a comely lass in the local food store played by Nancy Shubert if she has any rutabaga. Being unsure as to whether rutabaga is either something you eat or a little-known skin disease that I’d never heard of before, I decided to look it up. Turns out it’s a cross between a cabbage and turnip and is best served mashed, roasted or steamed. Just thought you’d like to know.

In one of those sheer coincidences that only ever happens in badly scripted films, Conlon also happens to be the man who committed the murder for which JW served time.

The rest of the plot involves JW trying to avoid taking part in any criminal activity whilst still cooking for the gang, at the same time risking his neck attempting to let the authorities know beforehand when and where the gang is going to strike.

Inevitably he comes a cropper when he tells Conlon he’s off to town to buy some eggs, which is a dead giveaway on account of there being a whole bucket of eggs under the kitchen table. I’m afraid that’s about as sophisticated as it gets.

Yakima Canutt, who also plays the gang leader, doubles for Wayne performing a stunt in which he grabs the axle of a slow-moving stagecoach, gets dragged along the ground then climbs up the back of the vehicle then onto the roof, kind of like a dry run for a more spectacular version of the same stunt in Stagecoach.

I stopped taking notes about halfway through because there just wasn’t anything else worth writing about.

I stuck with it though, just in case the film threatened to come alive at any point, which it did about ten minutes from the end.

Conlon tells the gang leader that if he finds out Brant is a stool pigeon that he will arrange for an unsuspecting Brant to return to the gang on his own, the idea being that if Conlon’s not with him then JW is dead meat.

As Brant rides into camp the gang open fire. The first bullet hits our hero in the shoulder. The next catches him in the neck, arterial blood gushing from the wound as he spins from the horse and crashes onto the hard ground.

He reaches for his gun and gets off a couple of lucky shots, drilling gang leader Canutt through the forehead, Canutt’s brains splattering the face of the outlaw next to him.

Before Brant can take out any more of the gang he is felled by a vicious hail of bullets, twitching and bucking in agony as the hot lead tears chunks of flesh from his body, before finally crumpling in slow-motion into the blood-sodden dust beneath him. Then I woke up. I should have realised something was amiss because that last bit was in colour.

Overall I’d have to say that Sagebrush Trail is neither an interesting or even mildly entertaining film to watch unless you happen to fall asleep, after which it then gets really good. Still, at least I found out what rutabaga was, so it’s got that going for it.