If this John Wayne 1936 Republic oater isn’t one of those “JW in disguise sent by the Governor to sort out local corruption” scenarios, we’ll eat our horse and try a couple of spurs for dessert.

Starting with a montage of Civil War battles, a title at the beginning sets up the story by describing the encroachment on the defeated South by ‘carpetbaggers’, or Northern politicians as they are referred to, who have moved south to take financial advantage of the defeated Confederacy.

It’s obvious from the beginning that General Holden, played by Cy Kendall, is a piece of Yankee scum, in cahoots with influential black citizens to take everyone for all they have.

He runs a militia of so-called ‘Troopers’, with their latest recruit, Bull Horrell, played by ever-reliable Yakima Canutt, presenting his CV and qualifications for the job with a gun barrel covered in notches. Two minutes in and you hate these guys already.

When the peasants start to revolt, the General declares Martial Law and raises taxes, turning the story, set in Texas, into a Western version of Robin Hood with the villain as the Sheriff of Nottingham.

Into this hornet’s nest wanders our old pal John Wayne, playing Captain John Ashley. Matters have been complicated by Ashley having fought for the Union during the war so he isn’t exactly welcome back home, especially as regards his former squeeze Virginia, played by Ann Rutherford.

When she first appears she’s wearing a long flowery dress that makes her look like she’s auditioning for “Gone With the Wind”, which by sheer coincidence Rutherford appeared in a few years later, playing one of the sisters of Scarlet O’Hara.

After being spurned by his ex-girlfriend, Ashley and his tobacco-spitting sidekick, Jed, played by Jim Toney, come across an extra-judicial execution of a Southerner by a bunch of so-called Troopers.

They intervene and stop the Troopers from killing a young boy they’re about to shoot in the back.

After driving the bad guys away, Ashley is about to go help the young kid struggling to lift the body of his dead Pa from the ground when he comes up with a cunning plan instead, to go and volunteer with Jed to join the murderous Troopers and attempt to change the system from within.

This is one of the first of all the early JW 1930s films we’ve reviewed so far to have a real laugh out loud moment which is worth sharing with all you Wayne fans.

Jed uses a bottle of brandy to distract a soldier whilst JW hops over the wall of a fort to go warn his friends the Troopers are coming to tax them.

Using the same trick on a doctor, the physician tastes it and lies to Jed that it’s not brandy but cough mixture. Jed throws his hat to the ground and exclaims, “Shucks! And me without no cough”

I guess you had to be there.

When the Troopers turn up to impose eye-watering taxes on the ranchers they find the inhabitants have been forewarned.

Suspecting that Ashley might be responsible for this, the General orders him to go and arrest Virginia’s brother, Dick. If Ashley succeeds in doing this then his loyalty to the General will be confirmed, but JW and Jed foil the idiot Troopers again and Dick escapes. 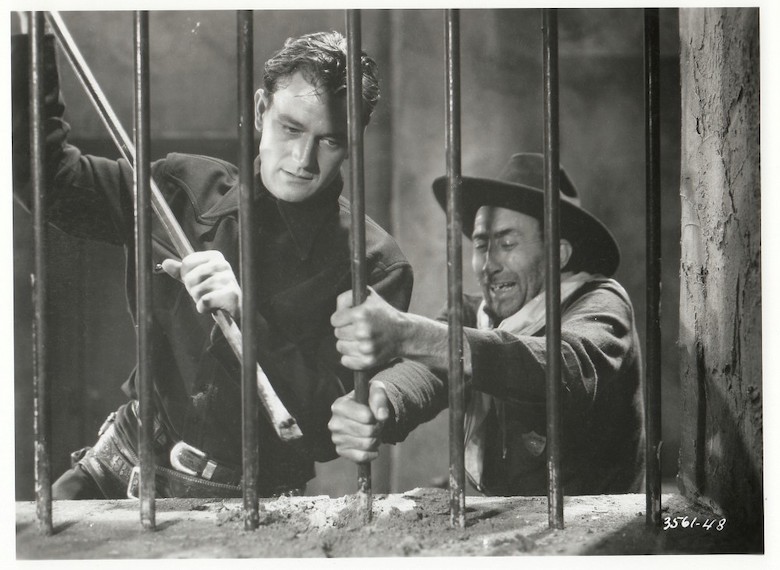 However, the intrepid duo are tracked down and taken back to the fort where they are put in a prison. The General knows his captives can easily break out of their cell, so he orders Bull to post a couple of marksmen to shoot Ashley and Jed when they try to escape.

Just in the nick of time, the General is surprised by an unofficial visit from the Governor of Texas who arrives at the fort to investigate charges of murder and corruption.

In the meantime, the locals realise Ashley is a good Joe after all and attack the fort. Ashley and Jed escape and show the Governor the books the General has kept indicating his duplicity. The General makes a run for it, gets shot for his troubles and everyone lives happily ever after.

Despite a somewhat so-so ending, “The Lonely Trail” is quite an enjoyable ride, the look and feel of this Republic effort indicating that the studio is starting to make more of an effort with Wayne’s career, which by now is looking very much in the ascendant.

The supporting cast, apart from quite a bad turn by actor Dennis Moore as Dick, is very good and the story, which shows the Black American characters in a (mostly) positive light for once, keeps the viewer hooked all the way through.

Another good showing for JW as he slowly but surely fulfills his destiny with an appointment for “Stagecoach” a few years hence.

PS It turns out Wayne’s character isn’t actually a government agent in disguise so it’s down to the stables for a couple of equine-flavoured sandwiches and a bowl of spurs for this reviewer.