I’m sure we’ve all got our own favorite lines from John Wayne movies, and hopefully, I’ve included a few of them in this list of 20 John Wayne’s movie quotes.

For an appreciation of John Wayne quotes this time, not from the movies but said in his own words about actors, directors, etc. there is another 15.

Having watched so many of Duke’s films over the last couple of years I made a note of some of the quotes, other than the more famous examples, that I thought might be appreciated by genuine JW fans. I’ve listed them chronologically rather than by personal preference.

‘You may need me and this Winchester, Curly’

The Ringo Kid offering his help to the Marshall upon seeing Apache war signals on the horizon.

‘You’re the guy we’re fighting this war for’

Wayne telling a young kid why America is fighting WWII on behalf of the Philippines, a line he repeats almost verbatim to a Vietnamese boy at the end of The Green Berets.

‘Get down off them horses. I don’t favor looking up to the likes of you’

Wayne as hard-headed trail boss Tom Dunson welcoming a group of cattle-drive deserters back into the fold.
One of my favorite John Wayne movie quotes from one of his best movies.

Advice that Wayne as Nathan Brittles hands out to all and sundry in this classic Ford Western.

This article includes affiliate links. If you choose to purchase any of the products we have discussed in this article, we may receive a small commission.

‘Any man that doesn’t wanna’ co-operate, I’ll make him wish he hadn’t been born’

A typical John Wayne movie quote giving a gung-ho speech to his team of fighter pilots.

A note of caution to ‘Red’ Will Danaher on the dangers inherent in initiating a fight with himself, or ‘Trooper’ Thornton as he was known back in Pittsburgh.

‘Did anyone ever tell you that you’re beautiful when you’re angry?’

Wayne as a German sea captain falling for the charms of Lana Turner, a woman so diminutive.

‘Is this an invite to a necktie party, Reverend?’

Ethan Edwards getting straight to the point with the Reverend Samuel Clayton, played by Ward Bond.

‘Sorry don’t get it done, Dude’

Still not exactly sure what Ole’ Davy Crockett actually meant by this statement, so if anyone out there can shed some light on this then answers on a postcard, please.

‘Monsewer, words are what men live by’

Kind words of wisdom from Wayne, even though the recipient, Paul Regret, played by Stuart Whitman, has previously tried to brain Duke with a shovel, leaving JW with a dull impression on his mind.

‘You can’t give the enemy a break. Send him to hell’

Duke exhorts his men to put the Geneva Convention on ice just for the duration of the D-Day invasion.

‘somebody outa belt you in the mouth…but I won’t, I won’t, the hell I won’t’

Wayne blind-siding Leo Gordon with a contradictory statement before dispatching him with a punch into a conveniently placed mud hole.

As John Wayne movie quotes go this is a pearl of wisdom from Wayne as Captain ‘Rock’ Torrey prior to losing a leg in the climactic ‘model boats’ sea battle.

‘Give this insubordinate son-of-a-bitch every truck and every blanket in the Third Army. And I don’t care who you have to steal them from!’

‘Out here, due process is a bullet’

Wayne providing a helpful and neat sound bite to a lilly-livered liberal pinko journalist on how the justice system works in Vietnam.

‘Fill your hands you son-of-a-bitch’ 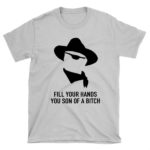 Probably not the best thing to say to killer Bruce Dern, as Duke eventually finds out to his cost.

‘Mister, you’d better find another line of work. This one sure don’t suit your pistol’

J.B. Books offers some career guidance to an inept outlaw at the beginning of the movie.